Chargers first round pick was robbed at gunpoint last month 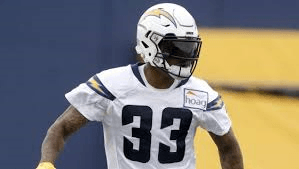 According to TMZ Sports, Derwin James the Los Angeles Chargers first round pick from Florida State was robbed at gunpoint last month.

Per a warrant obtained by TMZ, James and his uncle were approached by men wielding handguns as they left an Italian restaurant on Sunset Boulevard.

The men stole a Rolex watch and chains from James before fleeing the scene. James found three of his tires on his Rolls Royce slashed as well when he tried to pursue the thieves.

Police are still searching for suspects. Chargers have huge demands from their first round pick. No player has taken more defensive snaps during the last few weeks of voluntary workouts or during this month’s minicamp, as James has worked at safety with both the first- and second-team units.

He’s played most of his snaps at strong safety, but has also lined up as a deep free safety and near the line of scrimmage, all part of defensive coordinator Gus Bradley’s plan to just see how many ways he can use his newest versatile defensive back.