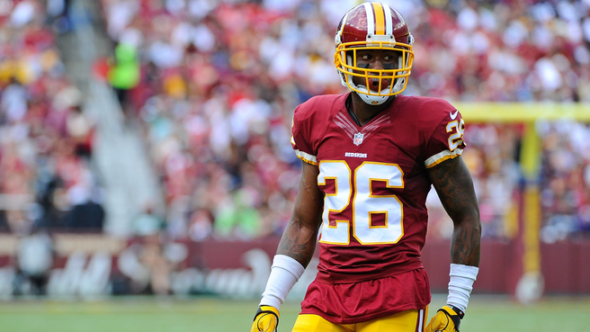 There are some solid free agents available right now but none better than former Redskins DB Bashaud Breeland. I am a super big fan of his and feel super bad for him. Breeland agreed to a three-year, $24 million contract with the Panthers in March. But he failed his physical, voiding the contract.

This was a big blow for him because Bashaud Breeland cut his foot in a non-football injury and it became infected. This injury put a huge dent in his paycheck but I would not be surprised if he shoots to sign a one year deal with someone.

Breeland, 26, was drafted by the Redskins out of Clemson in the fourth round (102nd overall) in 2014. While Breeland was suspended for one game of the 2015 season after an August 2014 arrest for possession of marijuana. He also suffered a sprained MCL during training camp that season.

Breeland spent his first three seasons with the Washington Redskins, where he racked up 270 combined tackles with 60 pass deflections and eight interceptions.  Several teams are interested in Breeland’s services, and according to ESPN, the 26-year-old cornerback will visit with the Raiders and Chiefs this week.

I feel the Raiders would be silly to sign Breeland who currently have Rashaan Melvin and Gareon Conley lined up as their starters. Melvin was signed in the off-season to a one year deal, and I would expect that is what Breeland will be looking for.

The Chiefs on the other hand have a great situation for Breeland.  They traded Marcus Peters earlier this year to the Rams, and left a huge void at the cornerback position. They also lost veteran DB Ron Parker. The Chiefs signed David Amerson before Free Agency and they really have a void at the corner position. I feel Breeland would be an instant upgrade. While I personally love two of their younger CB’s on their roster in Makinton Dorleant and Tremon Smith, Breeland would be a good veteran addition for one year.

To me, Breeland is a Pro-Bowl caliber cornerback, he just needs to find a team that will give him a shot to shine.