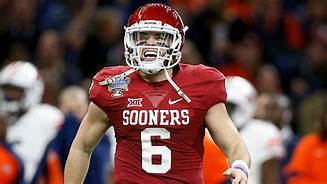 Baker Mayfield has been exceeding expectations in Cleveland

While Tyrod Taylor has been labeled as the starting quarterback in Cleveland, rookie Baker Mayfield has been on the rise. Hue Jackson talked tot he media about his first round pick Baker Mayfield and he is really impressed.

“Baker Mayfield has been everything I thought a quarterback should be for our organization thus far,” Jackson said Sunday of the first-overall pick in the draft, per ESPN’s Pat McManamon. “He’s doing the things that we want him to do the way we want him to do it, and he’s exceeding those things. Because he’s putting in the time. He doesn’t have a pride or [arrogance] any kind of way.

“His thing is, ‘You guys tell me what you want me to do, and I’m going to do it.’ That’s what he’s done since he’s walked in the building. To me that’s exciting. That’s a player that’s eager to learn, and grow.”

Will Baker Mayfield end up starting the season for the Browns? What do you think?