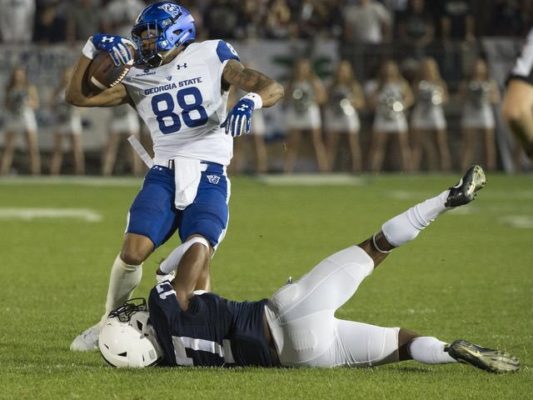 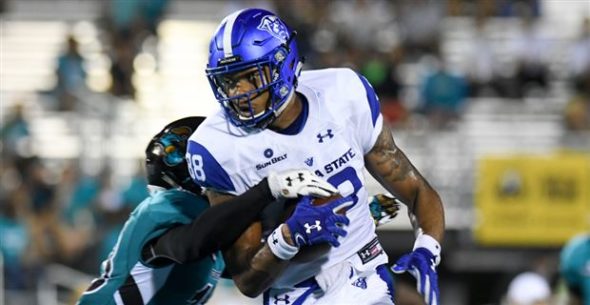 Werts is a TE/ H back candidate that can move like a big wide out.

Not used  a whole lot at Georgia State only starting 5 games at TE in 17.  His numbers might not turn many heads but the lack of legitimate talent at the TE position makes me believe with a good SR yr, Werts could find himself on a squad this time next year.  Sure I’m going out on a limb with the lack of big numbers and production but i am sure i am not the only one that sees a high ceiling for this SR TE when you look at him from a athletic POV.

He had 3 TD’s in 2016 yet didn’t have any last season, sometimes it’s just coaching or lack of red zone appearances. Whatever it may be we are not dealing with a high powered O & that should be taken into account.  We have to look at the full body of work as well as did he make the most of what was presented to him?

He can move for a big guy quick get off & in/out of breaks. Not the heaviest TE around but a really well built  lean muscular frame. Strong upper body with lean quick legs and really quick feet, long reach, vertical & lateral ability. Can catch in traffic has nice hands and focus.

Think he could be a good blocker he certainly shows toughness making tackles on ST.

Could play inline, Slot TE or even H back.  I see him alot like a H back formerly of the Eagles and current Bear TE Trey Burton. Not gonna say he is on his level by any means, Tre had 3 TD’s in 1 game so i won’t go there. I am saying i see a similarity in his style, size & skillset. A perfect fit as that 3rd TE that can do it all block, catch play ST’s.

2018- 19 season is huge for Werts  he is not quite at a NFL draftable level quite yet but if Georgis St  could utilize him more and have more success as whole on O. Very well could have a 500-600 yd yr with 5-6 TD’s easily. If that happens he will most likely if not surely find his way into a Training Camp next July.