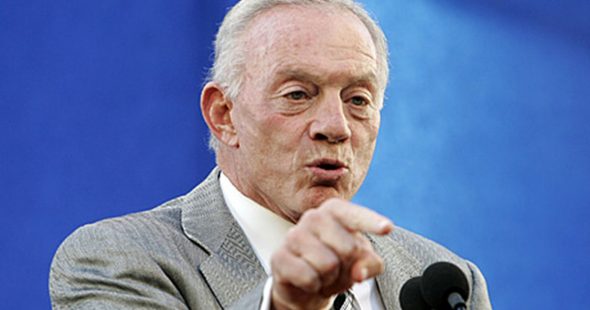 Dallas Cowboys owner Jerry Jones demands that his players stand for the anthem. He was given praise from the United States President on Twitter, but the folks around the NFL did not like what Jerry said.

Way to go Jerry. This is what the league should do! https://t.co/yEP1jK57xi

The league is trying to negotiate another revision to the policy with the N.F.L. Players Association, but Jerry and his son Stephen made it clear you cannot protest the Anthem as a Cowboy.

Jones said that all his players must stand on the field, and cannot remain in the locker room, which threw a wrench into the already fraught talks.

Jones’s son Stephen went further on Thursday, suggesting that the Cowboys would cut any player who disobeyed the team’s policy, per New York Times.

“I think it’s unfortunate that you have owners like him that use his position to intimidate and intentionally thwart even the idea of his players thinking individually or having a voice about issues that affect their communities daily, which is unfortunate,” Jenkins told reporters.

This is interesting but Dak Prescott the Cowboys quarterback made it clear he would stand for the Anthem.