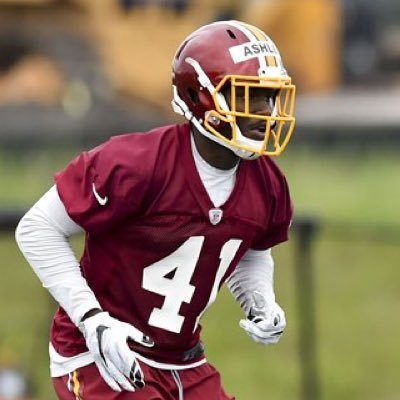 Can you give us a little background about you in general?

My name is Donzale Ashley, I’m 24 years old and I am from Stockton California. Growing up in Stockton football was a major impact in our community. I used football as a gateway to help myself stay out of trouble and bring my family together. As I grew older I continued to fall in love with the game and knew this was my calling. I grew up playing football with Brandin Cooks wide receiver for the Los Angeles Rams and Solomon Means cornerback for BCLions in the CFL. I had the opportunity to attend the Washington Redskins rookie minicamp in 2016, but unfortunately was not signed by the team. I am currently a free agent and working my way back onto a team. With my competitive spirit, I’m still training everyday waiting for my opportunity.

Can you talk a little bit about your past to present in terms of football/school?

Out of high school I had zero offers due to grades, so I took the junior college route and went to Butte community college in Chico, California. Butte was known for its great football tradition and also for local legend Aaron Rodgers. I was looked at by Texas State but never got offered, but finally I got an offer from a division 2 school in Ohio called Ashland University. Ashland turned out to be one of best experience of my life especially with football. Coming from a community college I learned that your spot can be taken at any moment, so settling at your position was not an option. Junior college also taught me the importance of the weight room as well. Before heading to my university I knew I needed to gain more strength and speed to handle the competition. Once I landed in Ashland, Ohio I put on more weight and it made a huge difference in my game. Playing football in college was a lot of fun, but as I went into the Redskins rookie minicamp I quickly learned that you have keep your head in the playbook or else you won’t see the field.

What position(s) do you play? Have any experience in others in game or practice?

I’m capable of playing multiple positions which will help me stay on the field longer. Junior year of college I played cornerback at 210 and my senior year I moved to strong safety/OLB at 225. Playing basketball helped me a lot with staying with my man and moving my feet. Running track helped me with maintaining my speed during the off-season. I’m currently now at 6’1 215, which is a hybrid safety in the league.

Whats the biggest off the field obstacle you had to overcome?

My biggest obstacle off the field was pulling my hamstring a couple years ago. I had to take some time off and get it fully healthy, which I did. I’m thankful for my supporting staff that helped me with my recovery.

Can you talk about your favorite coverage(s) & why?

My two favorite coverages are Robber 1 & Cover 3.  I studied/seen how the Seattle Seahawks ran their cover 1 Robber and as a safety if you’re the Robber you have an opportunity to make a big play. As the Robber I would love to hit any receivers coming across the middle or read the quarterbacks eyes and making a play on the ball. As for cover 3 I played it multiple times in college. Sometimes I was the high safety and sometimes I will come down in the box and play my zone. I loved coming down in the zone and helping on the run game and also holding that seem route as long as I can until I have to break on the ball.

Where do you learn more the film or field & why?

The film room is an important tool as you move up to the next level. The great thing about film is you see where you made your mistakes and correct them. Watching film with coaches/player will help you break down opponents and their tendencies. Film will put you in the best positions to make plays.

Who are the best players you have ever played against?

What are you looking at pre snap or one thing you can share?

One of the things I’m looking for pre-snap is the weight of the offense of linemen. I usually read how the weight is shifted and see how he previously moved in that same position. Then again all of this comes from watching film and studying their tendencies. This goes for RB’s and WR’s as well.

Regardless of traits what are some of the most important traits a DB can have?

Some important traits as a DB that I learn right away is staying square and making sure to move your feet first and then place your hands. I’m currently working with a NFL Vet Alex Molden and he is constantly preaching feet first then hands. Also eyes on the receivers hips, never at the shoulders. Alex has helped me with my one on one cover skills and break downs on coverages. Another key component is hand replacement while fighting with a receiver at the line of scrimmage and down the field.

Whats your biggest strength & something you have to work on?

One of my biggest strengths is my physicality. Being at 215 I must to be able to come down and make tackles and bring that physical tone to the secondary. Another strength is my mobility, being able to run with the running backs and slots give me the advantage to get on the field more and make plays. The things I am improving on is my reaction time so I can put myself in a better positions.

Do you model your game after anyone or watch any player closely?

I try not to model my game after anyone. I do my best to show that I’m aggressive, elusive, and a play maker. But the two guys that I love watching in the league is Deone Bucannon and Kam Chancellor. I’ve watched Kam and Deone play since their college days and I’m a big fan of their game. 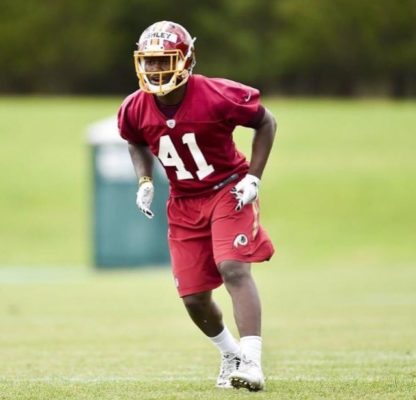 Preparation is a major key to my success. I make sure I know exactly what to do before stepping onto the field. In order for that to happen you must study your playbook. I use a unique technique in studying my plays but I learned that it helped me in the long run. For example I would set up cones in my house and move them around to challenge myself in the defense. I would also act like they are actual people and see what I would do if they made a certain move. This helped me on game day when everything became live.

What’s something that might help seperate you from a draft prospect & in general on the field?

Some of the things that separates me from others is my ability to make open field tackles and getting off blocks. My range is something I take pride in because it gives me a huge advantage. When the ball is in air I have the ability to knock it down because of my long arms and great hand-eye coordination. Having a long wingspan helps me take on bigger receivers and I like my chances come down with the ball. When it comes to the defensive schemes, the 3-4 defense is something that I loved to play. During the Redskins camp I got the opportunity to do both playing OLB and SS. Being that OLB I loved it because I was closer to the box and ready for the run. As the Strong I’m still playing the run but also not in a rush because the possibility of play action.  The zone blitzes out of the 3-4 was also my favorite. Coming down at the last minute replacing the backer as he blitzes and having the opportunity to INT a quick read, can’t get any better than that. Also disguising the cover 1 robber out of this look was exciting. I’ve been in all different type of defensive schemes, 4-3,3-4,4-4, 4-2-5 and was successful with them all. I’m confident in whatever scheme/ coverages are ran and I know whatever my responsibility is, it will get done.

If you were in a room with a gm/coach what would you want to tell them & let them know.

I had this dream since I was 10 years old to make it into the NFL. I had my opportunity and it slipped away. 2 years after that I dedicated myself into this game and told myself I will do whatever it takes to get back. I found a trainer, started working with guys from the NFL and also studied the game even more. I have confidence in my game and know I can help out a team in need of backers/safeties. I’m a guy that likes to execute and get things accomplished. I’m giving you my full undivided attention. My effort is going to be 110%. I will do whatever it takes to help the team win games. I’m a competitor, quick learner and also filled with a lot of passion. Let’s get to it!
This report was completed by Jeff Fidler, follow him on Twitter!
Related TopicsDonzale AshleyfeaturefeaturedNFL DraftNFL Draft InterviewNFL Draft Prospectnfl draft prospect rumorsnfl draft rumors