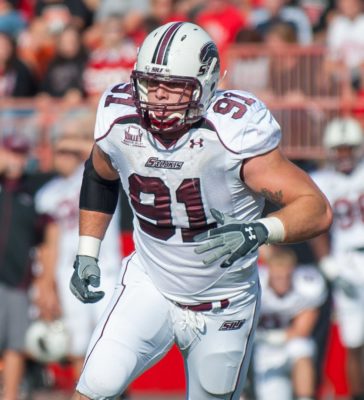 Today there was a school shooting in a small Indiana high school, and it could have been much worse if it was not for the tackling ability of a former small school football players turned Science teacher.

Jason Seaman played defensive end for the Southern Illinois Saluki’s and was actually a teammate of current head coach Nick Hill, who said this about the Hero.

“He was a great teammate, one of the team’s hardest workers. You could always trust him to do the right thing.”

Do the right thing is right. According to reports, a student came into the class room and shot one student before Seaman tackled the gunmen to the ground to subdue the situation and get the weapon away from the shooter.  Today a former small school football player saved 1300 students potentially for a unselfish act.

Jason Seaman’s mother reports he was shot 3 times, including one bullet through abdomen. Is out of surgery and in good condition. After he was shot, Seaman still managed to help stop the shooter. #Hero pic.twitter.com/e2XQbgn6qY

According to Jason Seaman’s Mother, her son was shot three times and needed surgery.

Please make sure you retweet this article and give tons of props to the Saluki turned Science Teacher!