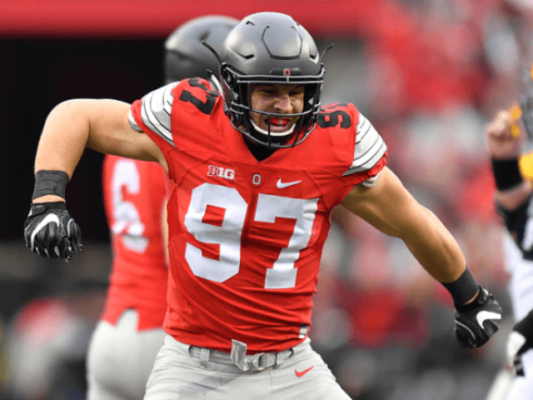 This could be a draft where 3 DL can be taken in the 1st 3 picks. There isn’t a clear cut on what QB could be taken first but this is what I like to call my “Phat Board”. (Hey Mel Kiper and ESPN have the big board so why not?

We at NFL Draft Diamonds are so happy to have Mark Thomas on board. Follow him on Twitter!

#1. Nick Bosa- I think it’s a no brainer that you take the best overall athlete and player at its position. Baby Bosa numbers may not wow you but the kid makes an impact on the game whenever he is on the field. At 6’4 270 he is a monster coming off the edge, being able to stretch play on outside runs so the linebackers can flow to the ball. He is an exceptional pass rusher as well. With his junior year coming up he has a chance to solidify his status as the number 1 pick.

#2. Dexter Lawrence- well Clemson’s entire D line will probably be taken in the 1st round because of how dominant they are. Dexter Lawrence is something special he is a beast in the interior. 6’4 335 and it takes about 3 people to block him. He has instincts like no other, he can sense to ball where ever it is. He is so athletic and aggressive line in the ACC where most likely afraid to block him rather than not having technique. Dexter has proven himself since a freshman and with a solid junior year he could build his tock tremendously.

#3. Ed Oliver-  Ed Oliver has been making make an impact since the day he stepped on campus going up against Baker Mayfield and the Oklahoma Sooners playing as a true freshman and he hasn’t looked back. Ed is different from a lot of interior D lineman due to his low stature at 6’2 but he is very athletic and comes off the ball with explosiveness. He has good usage of his hips when fighting through double teams as he torque’s his hips through both offensive lineman and can stand ground.  He uses his hands very well in run support.

#4. Jarrett Stidham. – the former Baylor standout turned JUCO product turned to the best QB in the SEC will probably become a top 5 pick. In his first year he tore up the stat sheet last year with 3,158 passing yards, and 66.5 percent completion percentage. Kevin Kolb former NFL QB says Stidham has had pro potential since he was a sophomore in HS making NFL type throws. Jarrett has the size (6’4 220) he has the arm talent and motion range to be a successful NFL QB. He also has mobility and the ability to escape the pocket and make things happen with his feet and throws on the run.

#5.- Greg Little- The former high school All American tackle out of Allen High School in the state of Texas he brings his 6’6 320-pound frame to #5 Overall. I know its early, but he is one of those can’t miss offensive lineman. With his quick feet in pass protection and large frame there is a reason why I like him at number 5. He held his own against the #1 defense in the country in Alabama.

#6. Greedy Williams- If a team needs a corner. You go after this guy with your first pick. As a redshirt freshman the 6’2 corner would stick the number 1 receiver on the opposing team. he has a good range of motion in hips when he has to make a play on the ball coming out of the break.

#7. Shea Patterson- I think he has what he takes to be a top 10 pick in this year’s draft. It’s not really a QB heavy draft so he could potentially be the 1stQB taken. I think Jim Harbaugh could develop him into that type of a guy. He has a strong arm and can extend plays and convert on those extended plays.

#8. Kelvin Harmon- a lot of people have Deebo Samuel has the 1stWide receiver off the board. With his injury to his hamstring and ankle those are injury that could affect a receiver’s career long term. I would take the next one up which is Kelvin Harmon. Harmon can stretch a defense with his 6’3 height and his long, powerful strides. He has great ball awareness and can look the ball in. he uses his hands very well when he has his eyes on the ball.

#9. Bryce Love- the Stanford product has been producing has a backup to Christian McCaffery, he has come into his own this past year with being the featured back. He was the vocal point of the Cardinals offense, rushing the ball 263 times with and 8.1 YPC average and gashing defenses for 2118 yards. With his patience coming out of the backfield and relaying on his vision to follow his offensive lineman to open holes for him. This sets him apart from most running backs in his draft. He will be one of those elite college backs in college football and could potentially win the Heisman this upcoming season.

#10.- Will Grier- The Star Quarterback for the West Virginia Mountaineers has proven he could be a top notch QB and both Florida and WVU. With a suspension back at Florida that led to his transfer to WVU. He didn’t let that stopping him playing great. In Dana Holgorsen offense, Grier showed that he has an arm that his unquestionable guiding the ball to where the receiver is supposed to be. He has a gunslinger mentality due to his 12-interception last year but through for 32 TD and over 3000 yards on the year.