Did you know that NASCAR has a Combine as well? Learn more about their Combine here 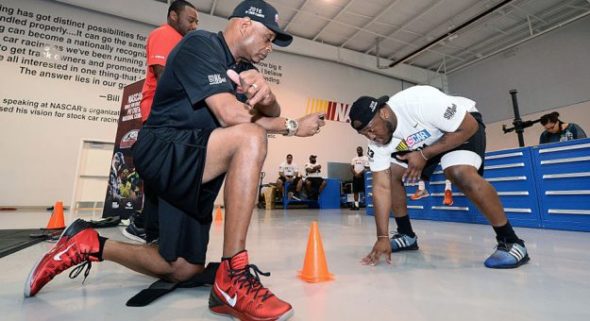 Were you an NFL hopeful and did you come up short? Did you know that NASCAR now has a Combine to become a Pit Crew Member? If you are a student-athlete you need to check this out!

NASCAR® and Rev Racing will hold a COMBINE today for 13 college athletes from across the country who will compete as tire changers, carriers and jackmen in the third annual NASCAR Drive for Diversity National Pit Crew Combine in Concord, N.C.!

This year’s combine competitors include college football, basketball, tennis and track and field athletes looking to transition to a professional career in NASCAR. Each will put their pit crew skills to the test and be evaluated based on a series of fitness, agility and crew member drills and competitions at the NASCAR Research & Development Center.

Top-performing participants will receive invitations to join the NASCAR Drive for Diversity Pit Crew Development program and train as pit crew members with Rev Racing beginning later this year. More than 50 graduates of the program are currently working in the NASCAR industry and 25 are pitting in the sport’s top series, the Monster Energy NASCAR Cup Series™.

This year’s competitors include Joshua Patrick, who was part of two HBCU national championship teams as a linebacker at North Carolina State A&T State, and twin brothers Jordan and Justin Boyd, both former track athletes at Alcorn State.

Brehanna Daniels, who previously starred as a point guard for Norfolk State’s women’s basketball program, has pitted as a tire changer in more than 20 NASCAR Xfinity Series™, NASCAR Camping World Truck Series™ and ARCA Series races while training with NASCAR Drive for Diversity.

If you have more information about this NASCAR Event, please feel free to contact myself so I can put you on the right path!! The Path to SUCCESS!