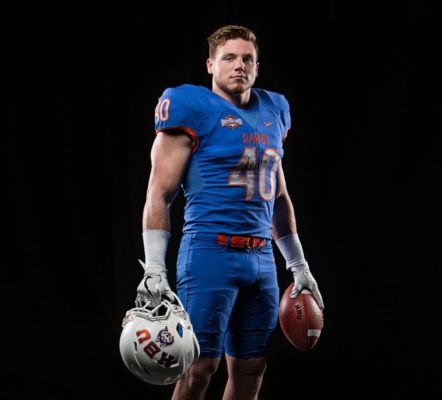 NFL Draft Diamonds wanted to take a second and recognize former Houston Baptist linebacker Garrett Dolan, who passed away yesterday.  He was found dead Sunday in the courtyard of a Midtown apartment complex.

Dolan, who was set to graduate Saturday, led HBU with 140 tackles last season as a senior.

He earned the program’s first All-American honor as a junior and finished his career as a two-time All-American and four-time All-Southland Conference selection at linebacker for the Huskies.

According to Houston police, Dolan was found dead about 2:30 p.m. by the property manager at a complex in the 2700 block of Travis. He was discovered in a courtyard, but it appears he may have fallen from the building’s roof, where police found alcohol and some of his clothing, according to the Chron.

Friends told police they had last seen Dolan at a Midtown club around 1 a.m. Sunday. It was unclear how long he’d been in the courtyard before his body was discovered.

Police investigation is pending an autopsy by the Harris County Institute of Forensic Sciences.