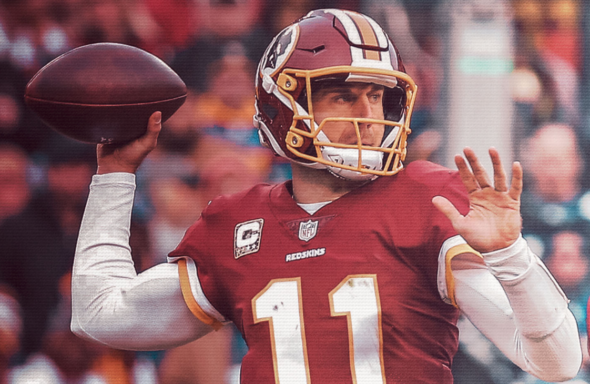 The draft had some big surprises and there have been so many moves both before and after the draft. Let’s have a quick recap of a few of this off-season’s biggest signings and check have a look at the latest odds and implied probabilities for each division.

Alex Smith signed a huge 4-year extensionwith the Washington Redskins to the tune of 94 million dollars. This opens up the door for last year’s top prospect, Patrick Mahomes in Kansas City.

But what about Captain Kirk? Cousins heads to the Mini Apple to captain the Vikings’ ship. The previous SKOL QB, Sam Bradford is off to Arizona in a 20-million-dollar deal for 2018 with an option at another 20 million in 2019. Carson Palmer officially called it quits on January 2nd. Drew Brees stays with the ‘Aints in a 2-year 50-million-dollar deal.

And the one team that you would think would have stability in the QB slot … given their GM is John Frickin’ Elway, has seemed to have been flipping coins with regards to who they would start. At least since Manning retired. But could Case Keenum end all of the Mile High QB Madness? I’m sure that Keenum really hopes so. This is his 5th team in five years, after all.

One of the most impactful moves this season might be getting overlooked. When we review BetOnline,we quickly find that the Evil Empire is once again starting the season as the favorites to win the upcoming Super Bowl but the Patriots’ star tackle, Nate Solder has opted for the Big Apple paycheck that comes along with joining forces with the G-Men.

This could be one of the most overlooked, yet massive impacts of the off-season. So massive that it could be like the impact crater of a meteor striking the New England offense. Tom is fantastic, but he is getting too old to take a lot of hits. His best pass protector just hit the bricks. In my opinion, this alone should make the Pats odds slip down below the likes of Philadelphia, Pittsburgh, and the L.A. Rams.

Speaking of the Rams, they just got a whole lot meaner. Ndamukong Suh is eager to prove himself in a one-year contract and will be alongside Aaron Donald. These two together up front are going to wreak havoc on O-lines across the nation.

The Rams also picked up speedster, Brandin Cooks. And though I don’t believe this is nearly as big of a loss for the Pats as Solder, it does give Goff another potent weapon in an already loaded offensive quiver. They also, grabbed up Aqib Talib and Marcus Peters to fill their weakest position, Cornerback.

Wait .. we are talking NFC West and Corners, so how about Richard Sherman going to the 49ers? The former Legion of Boomer is coming off a ruptured Achilles and is rapidly approaching the 30-year mark. So, I am not sure if he’ll be a game changer for the 49ers or not, but he will add some veteran leadership in the San Francisco secondary that the younger guys can learn from.

Jarvis Landry packed his backs to head to land where many a great player have gone to die —in recent years. So, Cleveland is trying to give Baker Mayfield some weapons to toss the ball to. But … will it be Tyrod Taylor starting? And over in Buffalo, Will former Alabama great AJ McCarron get the call or will the Bills give the ball to Josh Allen right off the proverbial bat?

The Patriots are clear-cut favorites to win the AFC East. This is most likely correct, but they need to watch out for the Bills. I really do believe that the Pats’ offensive line woes are going to cost them some games. Ultimately, they will probably win their division, but they’ll get knocked out in the playoffs.

The Chargers lead the pack, but I don’t think they will finish on top of the AFC West. Both the pundits and Las Vegas are relying far too heavily on Patrick Mahomes having a rough first season as the Chiefsstarter. There is unpredictability abound in the AFC West right now: Gruden coming back, Philip Rivers getting older, etc. So, even though they are underdogs of the AFC West, my money is on the Chiefs standing on top of the division once more

There is no surprise here. Barring a nightmare catastrophe for the Steelers, they should dominate the AFC North. I would put the Steelers above the Pats this year to win the AFC.

With the exception of the Colts, this is going to be a fun division to watch. The Texans have a superstar in the making with Deshaun Watson, but if that Jacksonville D is anywhere near as effective as it was last season, we could see the Jags atop the division. That said, you can’t count out the Flyin’ Hawaiian and the Tennessee Titans either.

It’s going to be a tight race in the AFC South, but I predict the Jaguars to defense to be the difference maker, putting them into the playoffs as the top team in the South.