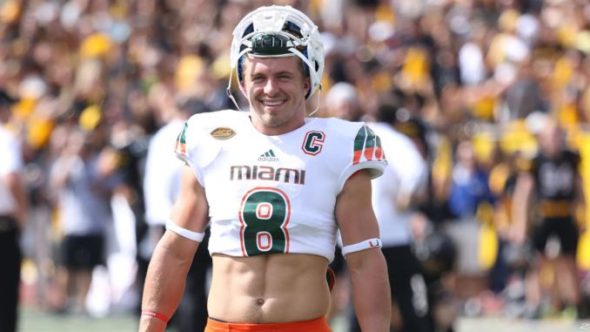 Sleepers in the 2018 NFL Draft

When you think of sleepers from previous NFL Draft’s that eventually made a name for themselves in the NFL, you think of Richard Sherman, Tom Brady, Russell Wilson, and Antonio Brown who are now the face of the NFL. Three sleeper prospects that come to mind in the 2018 NFL Draft are Nyheim Hines Running Back from North Carolina State, Kemoko Turay Defensive End from Rutgers and Braxton Berrios Wide Receiver from Miami. These NFL draft prospects can be a steal for one team during this weekend’s draft and can have a profound impact in the NFL.

Nyheim Hines is an explosive running back that can use his speed to make defenders look silly. Hines is an intriguing prospect because of his ability to play in the backfield and in the slot as a receiver. With that ability it allows offensive coordinators to use Hines in multiple formations and sets to get the most out of his skill set. Nyheim also has experience as a return man and was successful at it. The downside on Hines is he’s a smaller back and that durability issues can be a concern if not used the right way. Teams such as the Dallas Cowboys, Los Angeles Rams, and Arizona Cardinals who have an established running back one on their team can add a back like Nyheim Hines. His versatility will only upgrade an offense at the next level. Nyheim Hines can be a great change of pace back and a well rounded special team player in the NFL.

Kemoko Turay is a long rangy defensive end that plays through the whistle. Turay ran an impressive 4.65 40-yard dash at 6’ 5” and 253 lbs. Along with his speed, his lateral quickness and ability to close in on ball carriers is what makes Turay a unique prospect. Kemoko Turay had two shoulder injuries in his sophomore and junior year season’s so that hindered his development as a pass rusher over the past few years. Turay is a raw prospect and still needs work to become a dominant defensive end in the NFL. What scouts rave about him is, his effort to not give up on plays. Turay has a motor like no other and will run from sideline to sideline to find the ball. He put that on display during the 2018 Reese’s Senior Bowl and left a lasting impression on NFL scouts. Pass rushing needy teams will be taking a hard look at Kemoko Turay come tomorrow’s NFL Draft.

Braxton Berrios is a sure-handed pass catcher from the University of Miami. Berrios is a true slot wide receiver and will do whatever it takes to keep the chains moving. Braxton is fearless and is willing to go across the middle in traffic to make a play with no hesitation. He’s a smart player who knows how to work in short spaces while protecting his body. The size is something that will concern teams due to the hits he will take at the next level. Braxton Berrios reminds me of a Julian Edelman or Ryan Switzer. An undersized wide receiver but has the ability to make tough catches. Berrios also has experience as a return man and that can play in his favor to make an NFL roster come this fall. Don’t let his size fool you because his route running ability speaks for itself. Just put his tape on and you will see how crisp his routes are. NFL coaches will just fall in love with his competitive fire.