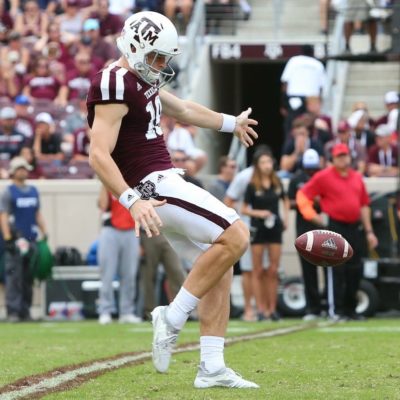 My parents. They have sacrificed so much to help me achieve my dreams. The most selfless and supportive parents a kid could ever ask for.

It’s hard to pick just 1. I’ve had many teachers and professors over the years who have been such a great influence on me. In high school, Jason Thompson and Coach McCullogh really helped me be a better student. They really cared about the students and made the classroom a fun place to be. In college I had professors like Paul Batista and Gregg Bennett in the sports management department who always looked out for me and expected a lot from me in the classroom and I think that really helped me during my college years.

I played a little bit of everything! Football, baseball, basketball, golf…you name it, I played it!

In the SEC, everyone’s tough. But being a punter, it’s different. Tough players for me to play against are the other SEC punters. They are all very good and you want to go out and out punt them every week. 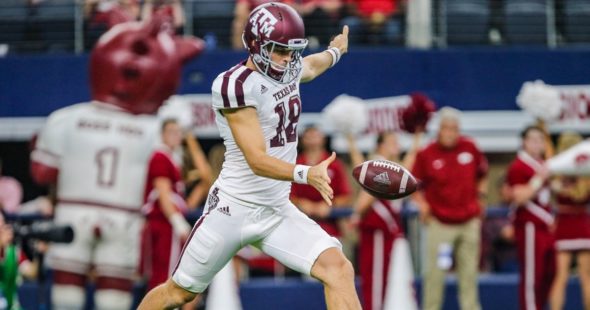 Damien Ratley. The guy is a beast. Had a big year for us this year and really came through with some explosive plays when we needed it.

There isn’t one song for me! I have a whole playlist haha. Consists of anything 1997-2005 punk rock, alternative, anything! Blink-182 to foo fighters to nirvana. I got it all!

I would say my game is most like Chris Jones of the Cowboys. He is a very consistent directional and hangtime punter.

Being a walk-on in an SEC program. It was rough having to come in and earn everything. It was a long and sometimes frustrating road to becoming a starter and earning a scholarship but ultimately was worth every second. I got the opportunity to sit and learn from great specialists like Drew Kaser, Taylor Bertolet, and Josh Lambo. And it all paid off, in the end, I was ready when my time came.

I just put on my headphones and relax. I am very routine oriented so I go out early and stretch and get loose and just relax before I come out to punt. Something. I’ve just always done.

As a punter, probably UCLA 2016 or Florida 2017. Two of my best games and I played really well. Ended up being great games that we won at the end.

Overall, I’d have to say against Alabama 2014. A 95-yard touchdown pass from Manziel to Mike Evans. I’ve never witnessed a louder moment in Kyle Field.

I think giving back to the younger generation of specialists is something that is very rewarding. I have great punting coaches that I work with that I go back and help them coach some of the younger guys ever once in a while. It’s very rewarding for me to share what I’ve learned with younger guys, jut as the older guys did for me.

I grew up a HUGE NY Jets fan!

If you could have dinner with three people dead or alive, who would choose?