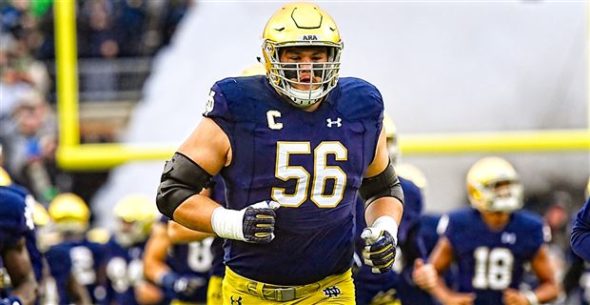 Quenton Nelson is the best prospect at guard in this year’s draft and he is also one of the best-run blockers I have ever seen. Nelson is an elite guard prospect with tremendous size, rare power in the trenches and finishes blocks with authority. His initial punch is compact and powerful while working his hips and feet into position to keep blocks secured. At Notre Dame, Nelson along with his teammate Mike McGlinchey (also an elite prospect) was one of the most feared tackle/guard combo in college football. He is an absolute tank in the trenches, and he is not satisfied until he is imposing his will. Nelson also moves well laterally and very fluid in space. He does very well in pass sets, he works from the desired posture while keeping a wide base as well as distributing his weight evenly. With his overwhelming hand strength, he is able to snatch and sustain in pass pro and run-game without an issue. Nelson does have a slight hitch when he comes out of his stance as a pull blocker, but that is something that can be fixed. He uses his hands extremely well always being the first into the frame with incredible extension and jolt. Quenton Nelson is unquestionably a 1strounder, and it is very likely that he will be drafted within the top 10. He moves so well in space and absolutely punishes defenders, Quenton Nelson is a generational offensive guard prospect without a doubt.

This prospect analysis was written by Reagan Roberts. He has been an amazing addition to NFL Draft Diamonds. Make sure you follow him on Twitter!