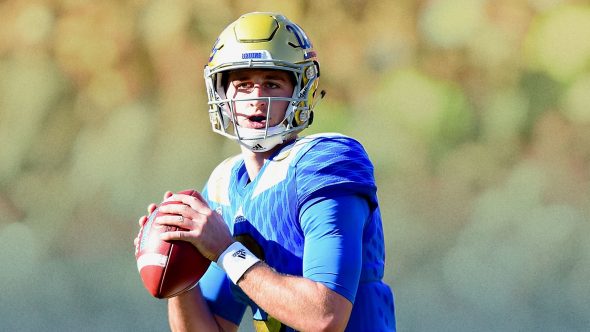 Josh Rosen, QB, UCLA, 6′ 4’/226, Combine Results: 40/4.92, Bench/DNP, VJ/31″, BJ/9’3″.   In 2017 College Football Season, Josh threw for 3,756 Yards, 62.6% completion percentage, 26 TD’s, 10 Interceptions, with a 147.0 PR/Passer Rating.  Josh is a natural pocket passer who has very good mechanics.  His tight spiral allows him to throw with good touch, power, and accuracy.  He leads Receivers in stride.  Josh can take snaps under center which is not common for many QB’s in this year’s Draft class.  He is the most NFL ready Quarterback.  He has had injuries in College, including knee and two concussions which shed light on his durability.  Josh threw well at the Combine where he can be seen launching 70 Yard passes downfield with ease and accuracy.  Possesses a powerful NFL arm.  Josh can make all the NFL throws with confidence and accuracy.  Josh Rosen can become a special NFL starting Quarterback and possible NFL Franchise Quarterback.

Josh Allen, QB, Wyoming, 6′ 5″/233, Combine Results: 40/4.75, Bench/DNP, VJ/33.5″,BJ/9′ 11″.  In 2017, Allen threw for 1,812 Yards, 56.3% completion percentage, 16 TD’s, and 6 Interceptions, with a 127.8 PR/Passer Rating.  Allen has great size, athleticism, and toughness, coupled with the most powerful arm in the Draft.  He has the mobility to avoid the rush, and speed to roll out and throw on the run.  Pro Scouts measured Allen’s throwing velocity at 66.0 MPH.  Allen does have accuracy issues which need to be corrected for him to attain success at the NFL QB position.  In the Senior Bowl, Allen displayed his ability to throw with touch and good accuracy during difficult throwing conditions.  At the Combine, Allen impressed NFL Scouts with his powerful arm strength during passing drills, especially with his deep throw accuracy downfield, launching some throws up to 75 Yards.  He also had a good Pro Day during passing drills.  Allen’s NFL QB development may take longer until he masters his accuracy issues.  I’m most impressed with Allen’s upside, which is unlimited how successful an NFL Quarterback he can become.

Sam Darnold, QB, USC, 6′ 3″/221, Combine Results: 40/4.85, Bench/DNP, VJ/26.5″, BJ/8′ 9″.  In 2017, Darnold threw for 3,787 Yards, 63.7% completion percentage, 26 TD’s, 12 Interceptions, with a 151.0 Passer Rating.  Darnold has a strong arm with good accuracy.  Works through progressions and makes necessary reads.  He can make any throw.  Darnold has a quick release with a tight spiral while dropping the ball too low during wind-up prior to release.  He has shown good mobility to avoid rush and sacks.    He displays very good leadership qualities.  He throws too many interceptions, has been inconsistent with costly turnovers.  Darnold had an impressive Pro Day while throwing the ball in the rain showing how he can successfully adapt to adverse weather conditions.  He is adept at throwing on the run out of the pocket.  He raised his stock with an impressive Pro Day during passing drills demonstrating that he’s one of the top three Quarterbacks in this year’s QB Draft class.

Baker Mayfield, QB, Oklahoma, 6′ 1″/215, Combine Results: 40/4.84, Bench/DNP,VJ/29″, BJ/9′ 3″.  In 2017, Mayfield threw for 4,340 Yards, 71.0% completion percentage, 41 TD’s, 5 Interceptions, with a 203.8 Passer Rating.  Mayfield is the most accurate passer in this Draft class.  He has thrown for a 70% completion average in his last two years at Oklahoma.  He doesn’t throw many interceptions.  He has a strong enough arm for the NFL, and he’s athletic and tough.  Most accurate in this year’s Draft class.  During his Pro Day, Baker completed 62 of 70 passes showing his accuracy level is unparalleled among all College Quarterbacks.  He impressed NFL Scouts with his arm strength, extreme accuracy, and his ability to roll out and throw on the run while leading and hitting Receivers in stride.  His ball placement was impressive.  He raised his draft stock more during his Pro Day in comparison to his NFL Combine passing drill workout.  He is a very good field leader which is supported by the awards he received in the 2017 College Football Season.  Mayfield won the Heisman Award (College Player of the Year), Maxwell Award(College Football Player of the Year), Davey O’Brien Award (Nation’s Best QB), Walter Camp Award (College Football Player of the Year), and the Manning Award (College QB Award).  Mayfield needs to mature and learn to control his emotions and antics at the NFL level.  The immature disrespect and antics that Mayfield demonstrated toward opposing Coaches, players and fans in College Football, will not be tolerated in the NFL.  A very good Football player who must foster his maturity and sportsmanship for the game of Football, including athletes, coaches, and fans.

Mason Rudolph, QB, Oklahoma State, 6′ 5″/235, Combine Results: 40/4.90, Bench/DNP, VJ/26″, BJ/DNP.  In 2017, Rudolph threw for 4,553 Yards, 65.0% completion rate, 35 TD’s, 9 Interceptions, with a 170.0 PR.  Rudolph doesn’t throw many interceptions compared to touchdowns.  Touchdown to interception ratio is very good.  Rudolph has an NFL arm with great size.  He likes to throw the deep pass while displaying good touch.  He is most comfortable with deep passes where he can put air underneath his passes.  He did win the Johnny Unitas Golden Arm and Sammy Baugh Awards because of his high Senior production throwing for over 4,500 Yards with 35 TD’s at a 65%  completion rate.  He makes the necessary progressions downfield while looking off safeties.  Doesn’t always put enough velocity on his intermediate throws.  He isn’t a QB that progresses down the field with outs and slant patterns to gain yardage.  Primarily a shotgun passer in College who will have to learn to take more snaps under center in the NFL.  He has had ball security issues in College.

Lamar Jackson, Louisville, 6′ 3″/216. Jackson did not participate in any of the Combine Workouts, only the Passing Drills at the Combine.  He also participated in his Pro Day passing workouts.  He has struggled with accuracy during his College career.  He will do best with an NFL team that runs a lot of the Run/Pass-Option plays.  Jackson is an excellent Athlete.  His passing mechanics need to be improved for NFL success.  He will be taken as the 5th or 6th QB in this year’s Draft.

This article was organized by former Pro Football Scout James Watkins who is one of our go-to guys in the NFL.