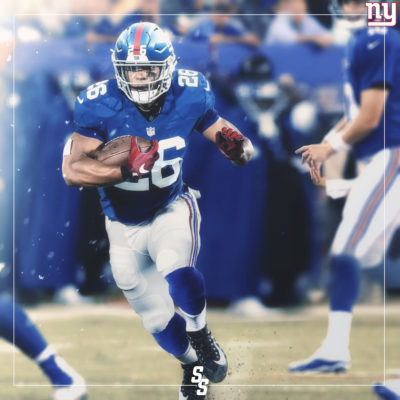 This mock draft was written by one of our newest writer’s Peyton Garrison. Make sure you follow him on Twitter!

Nobody really has any idea who John Dorsey and the Browns will take first overall, but the guy who’s been talked about the most is Darnold. The QB position for Cleveland has been a mess for decades and they need to find a QB who is the “safest” pick, Sam Darnold. I truly believe Dorsey loves Josh Allen and Baker Mayfield but decides to go with the QB who is least likely to bust.

Eli Manning is entering the twilight of his career which is why quarterback could very well be the pick here, but I can’t see Dave Gettleman and company drafting Manning’s successor just yet. The Giants traded Jason Pierre-Paul earlier this offseason, creating a need for a pass rusher but this draft has really good depth at the edge rusher spot. Barkley has been linked to Big Blue for weeks now and it makes too much sense to pass up on. The Giants believe they are closer to winning another Super Bowl with Eli and Barkley could be the exact piece they’ve been missing.

The Jets need a cocky, playmaking QB back in New York to get them back to competing in the AFC East. It has been a revolving door of mediocrity for the Jets for a long time and I think Mayfield could finally be the perfect fit for what Gang Green has needed for years. Mayfield is perfect for New York and he can handle the media attention and scrutiny.

There’s a real possibility the Browns could trade down with another QB needy team like Buffalo or Arizona, but they will go ahead and take the best player on the board. Chubb opposite Myles Garrett could give Cleveland one of the most dynamic pass rushing duos in the league.

Another trade down candidate, the Broncos have lots of options at the fifth pick but they love Denzel Ward and he would immediately fill the void that Aqib Talib left when Denver traded him. With Chris Harris Jr., Bradley Roby, and Ward, Denver could get back to winning games while riding on the coattails of their defense.

The Colts really would like to trade down and stock up on more picks, while also getting their man Smith as well but I don’t see Smith being on the board past the top 10 and I doubt the Colts do either, so they go ahead and get the man they’ve wanted.

Derwin James in an automatic lock for the Bucs, unless he somehow goes top six. I do think Tampa likes Fitzpatrick but James is exactly what the Bucs secondary needs-good speed, great coverage, and a hard-hitting presence.

Nelson to the bears is a no-brainer as long as he is still on the board. The Bears need to keep Mitch Trubisky upright and healthy so why not get the best offensive lineman prospect in the last 10 years?

San Francisco could go in so many different directions, including trading down but the Niners have had a glaring need at right tackle for a while and they could kill two birds with one stone by also finding Joe Staley’s future replacement at left tackle by taking McGlinchey.

Raiders’ GM Reggie McKenzie loves himself some Alabama players and Fitzpatrick is the best player on the board. Oakland needs all the help the can get in the secondary and Fitzpatrick can play either corner or safety for the Raiders.

The Dolphins are doing a complete overhaul of their roster and I wouldn’t be surprised if they decided to take a QB but Miami also has a lot of defensive needs and Edmunds is the best player on the board. He can play inside or outside and Miami needs some versatility on that front seven.

I think Bills’ GM Brandon Beane is content with staying at 12 and not dealing their second first-round pick because of all the needs Buffalo has. Allen isn’t the best QB prospect in the draft but he is the best fit for Buffalo. He can sit behind AJ McCarron and learn from a competent starter. His arm strength will also play well in bad Buffalo winter weather.

The Redskins have a lot of holes to fill in the defensive backfield with the departures of Bashaud Breeland, Kendall Fuller, and Su’a Cravens this offseason. Jackson’s big body and ball skills will fit in well opposite of Josh Norman.

A surprise pick here for the Packers but they moved on from Jordy Nelson and Randall Cobb has not been as big for the Packers like he used to be. Davante Adams has also had some issues staying on the field, so adding Ridley would help solidify some depth at the receiver position and would give Aaron Rodgers even more options.

I really believe the Cardinals want Baker Mayfield but they don’t want to give up the farm to go get him. Arizona knows one of the three QBs will be there for them at 15 unless someone drastically over pays for one which could happen. Rosen would be a great fit in Arizona.

I really believe the rumors that the Patriots really want Lamar Jackson and I think they will have to jump some teams to go get him. If they trade 23 for 16 they would still be able to keep the 31stoverall pick which would be a huge win. Jackson may even be able to see the field in 2018 as a special weapon for Belichick’s offense.

Vea is the best player on the board and the Chargers need some more talent at defensive tackle, especially since Corey Liuget is suspended for the first four games of the season. Vea should go much higher than 17 but as we’ve seen in the past, great players will fall because of other teams reaching for quarterbacks and need.

What better way to replace Michael Bennett and Cliff Avril then to get the second best pass rusher in the draft? This is a dream scenario for Seattle and I can see Davenport falling to 18.

I believe the Cowboys love Courtland Sutton and they could trade up later and get him but a report came out that some people in Dallas see Vander Esch as “Urlacher 2.0” so it wouldn’t be a shock to see LVE in Big D.

Head coach Matt Patricia loves long and lean athletes on the edge of his defenses and Landry would be a perfect fit opposite Ziggy Ansah. Lions’ defensive coordinator Paul Pasqualoni also coached Landry at Boston College so there is some familiarity there.

The Bengals offensive line has been a disaster ever since losing Andrew Whitworth and Kevin Zeitler, but they added Cordy Glenn and if they could add a talent like Hernandez to the interior offensive line, it could make a huge difference for Joe Mixon and Andy Dalton.

Buffalo had Reggie Ragland pegged to be their starter once Preston Brown left town, but they shipped him off to Kansas City which has turned out to be a bad move for the Bills. They can redeem themselves by taking Evans here, which would help shore up the middle of their defense.

Baltimore has had a revolving door at the tight end spot for the last few years and they’ve even missed with drafting tight ends, but Goedert is a mixture of Zach Ertz and Travis Kelce and Joe Flacco could really use a weapon like Goedert down the middle of the field.

Alexander is an outstanding prospect and I think could and should go a lot higher than pick 24, but for the Panthers, this would be a huge steal. Their deal with Bashaud Breeland fell through and they’ve needed a ball-hawking corner ever since they traded Josh Norman.

The Titans had a big loss this offseason when Avery Williamson left in free agency to the Jets. All the top inside linebackers are off the board and the Titans are in a position to reach on a prospect like Baker, who played for head coach Mike Vrabel at Ohio State.

Another steal in this draft as the Falcons land one of the best interior defensive linemen in the draft. The Falcons desperately need front seven depth and Payne is easily the best player on the board for his position.

The Saints are one of the few teams without glaring needs on their team, but they did lose Kenny Vaccaro this offseason. New Orleans did sign Kurt Coleman but adding some quality young players in the secondary would be ideal for the Saints.

I’m not buying the Derrius Guice to Pittsburgh talk, they have other holes to fill and adding some versatility to their defensive backfield is more important. The Steelers lost William Gay in free agency and outside of Joe Haden, they don’t have a lockdown corner. Hughes could also return kicks and punts instead of risking injury to Antonio Brown.

Jacksonville added Andrew Norwell this offseason to an already talented offensive line but you can always improve an offensive line. Wynn could add some versatility because he can play all positions up front.

Minnesota needs to add some more depth up front and the interior offensive line is a concern for the Vikings. I love Ragnow’s versatility and he has been shooting up draft boards lately.

The Patriots could take a tackle at 23 but at 29 they will be in a position to take a couple different options along the offensive line. In this case, they get very lucky to get a tackle in Miller. Obviously losing Nate Solder was the Pats biggest loss this offseason but drafting Miller could very well fill that major ole on Brady’s blind side.

The Super Bowl champions have very little needs and they have a lot of depth at most positions, even at receiver but Philly doesn’t have a ton of reliable options behind Alshon Jeffrey. Moore is an excellent route runner and would fit in well with Jeffry, Mike Wallace, and Nelson Agholor.