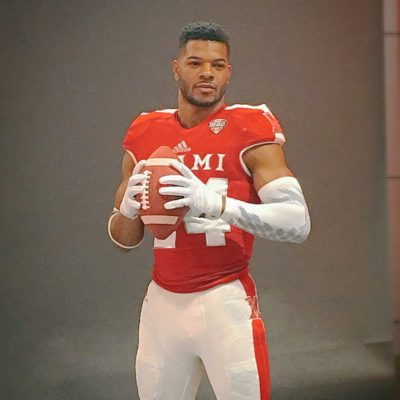 Where are you from? Dayton, Ohio

My mom, she just a strong woman who has been through a lot with all her battles with cancer but never makes excuses. Her courage and hard working mentally drives me to do what I do because I learned at a very young age that if she isn’t making excuses when she could’ve.. why should I about anything

I honestly don’t have one, my time at Miami was unique and great due to many people who helped shaped me into the man I am today.

Growing up, I always played football, basketball and ran track. Gave up basketball my sophomore year of high school because 3 sports back to back to back with no break just didn’t seem smart when at 5’10 it was obvious basketball wasn’t taking me anywhere

My sophomore year I was moved to Safety which was a learning curve but going against Corey Davis in the slot is a beast lol like he’s good on the outside obviously put him in the slot is a different monster.

Jared Murphy, because of his size he’s overlooked often. He’s a slot receiver who never drops a ball. He’s fast and crazy quick.

I listen to a wide range of music but before every game, I listen to this ray Lewis motivation video. I’ve been doing that since my junior year of high school. 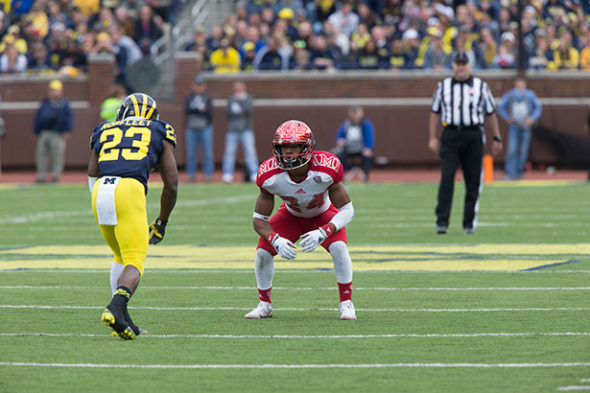 Young Revis, I pride myself on being a guy that can lock someone down and stuff the run.

2015 losing both my grandma and redshirting that season due to injury was tough for me because I lost two important things in my life at the same time. My family and friends helped me overcome and stood by my side through it all.

2016 season, last game of the year we played ball st. We started the season 0-6 and we were currently on a 5 game winning streak and needing to win this to get a bowl game invite. I played arguably one of my best games. I had an interception right before half in the end zone that changed the game because we were losing and it wasn’t looking good for us. But that play and the momentum shifts for us.

I do a lot around campus so it’s hard to pinpoint one thing that stands out over them all. One thing that always touches my heart is to see how much my playing of football means to people and serves as an inspiration due to my story.

I was always a Dallas Cowboys fan growing up, kinda just happened that way. My dad is a die-hard fan so I just tagged al my as well.