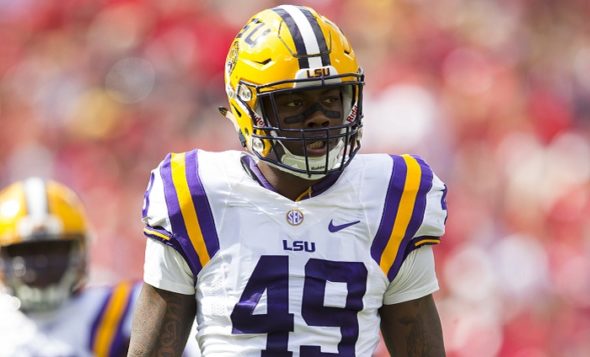 It’s every NFL Executives job to improve their team during the off-season. Some will take this approach and run with it, while others will fail miserably. One of the hardest things as an NFL Executive is projecting the success of college football stars in the NFL. One may not know the exact projection they will get out of every player they draft. We have seen this story, the first-round pick turns out to be a bust, while the late round draft pick turns into a diamond in the rough. At the end of the day, it’s up to the NFL Executives to trust their instincts on a particular player. The 5 players below have an excellent chance of becoming household names in the NFL for years to come. In saying that, we could be hearing about these players in a negative way down the road as well. Most of the prospects on this list are QB’s or EDGE rushers because these are the two positions that have are High Risk/High Reward Situations.

Scouting Report: 2016 was a year to remember for Harold Landry, the edge rusher from Boston College. He finished his junior year with All-American honors, posting 16.5 sacks and 22 tackles for loss. Landry was a freak of nature in 2016. Landry would have easily been a top 15 pick in the 2017 NFL Draft, but he decided to return for his senior campaign. Landry’s production went down drastically, racking up a whopping 5 sacks and 8.5 tackles for loss. Landry also suffered an ankle injury, causing a decline in production. If Landry wants to become a household name in the NFL, he will need to have an encore 2016 performance.

Scouting Report: I’m all aboard the Baker Mayfield train. I do believe with his competitive nature and attitude, he will help an NFL organization win some football games. The accuracy is there, the football I.Q. is there, and the winning mentality is there. However, there are some questions when it comes to Mayfield. Instead of being compared to successful NFL quarterbacks, Mayfield is compared to Johnny Manziel. We all know how that story ended, and it didn’t end so well. Manziel, a first-round pick is now unemployed, trying to make a comeback to the NFL. There are some character issues with Mayfield, being arrested last year for public intoxication, but I do not see this hindering him in the NFL. Playing in the Big 12 with no defense and high scoring offenses is also a question mark. It all comes down to if Mayfield can consistently produce in the NFL.

Scouting Report: A 5-star prospect coming out of high school, Arden Key wasted no time at LSU. During his first two years, Key’s athleticism off the edge showed, making an impact right away at the next level. Through 23 games, Key tallied 16 sacks, making it very difficult for offensive tackles to block him in pass protection. The speed, power, and length are there for Arden Key. In saying that, there are some concerns with Key. Taking a leave of absence last spring, resulting in him being out of shape once summer workouts began. It seemed as if Key had lost a step off the edge in the coming year. Even though he recorded 5 sacks in 8 games, teams still are concerned with Key and his consistency. Key has the potential to be great, as well as the potential to bust in the NFL.

Scouting Report: Whenever you see a small school quarterback come out for the NFL Draft, there are always questions in regard to that prospect. Playing in the Mountain West Conference, can Josh Allen play at a high level in the NFL? Allen has all of the tools to be the best quarterback in this draft. The size alone makes teams drool over him. His arm strength is the best in this year’s quarterback class by a long shot. Allen does contain raw physical tools that can produce if drafted by the right team. The biggest question mark when it comes to Josh Allen is his completion percentage. Allen finished with a 56.2 completion percentage which is a concern for NFL Teams. Allen also struggled against big name teams like Oregon and Iowa, not being able to score against them while throwing three interceptions. Josh Allen could go number one overall in this year’s NFL Draft. Only time will tell what happens to Josh Allen in the NFL.

Scouting Report: Lamar Jackson is pound for pound, one of the best athletes in this draft. Jackson has everything that an NFL executive wants in a quarterback. He has a strong arm, the ability to extend the play, and the leadership qualities that are needed. What concerns teams is his pocket presence. Can Jackson hang tough in the pocket and deliver an accurate throw down field? Jackson played in the gun in college, making his lack of experience under center impose questions. His lean body build is comparable to Robert Griffin III’s, resulting in many injuries to Griffin. Do I think Lamar Jackson is worthy of a first-round pick? I absolutely do. Whoever drafts Lamar Jackson will either strike gold or go broke within a year.