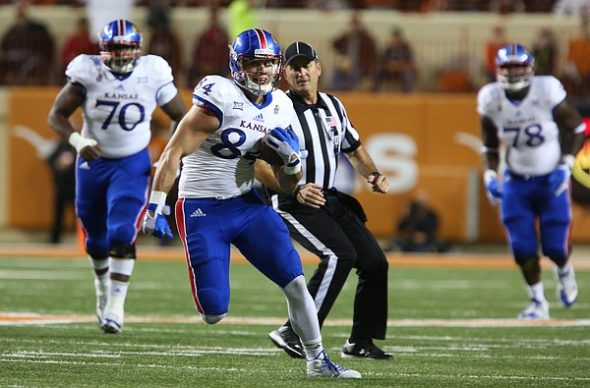 Standing nearly 6’4” and weighing 246 pounds, Johnson was originally recruited to the University of Kansas by Charlie Weiss (renowned for his time as the New England Patriots offensive coordinator, mentoring Tom Brady and helping lead them to three Super Bowl wins) with plans to utilize the former three-sport standout and 3-star [Rivals.com] recruit in a pro-style offense.

After seeing time on special teams and limited snaps on offense as a freshman Johnson blossomed in his sophomore season during which he beat out current Carolina Panthers TE Kent Taylor (a former 4-star recruit and rated the #1-rated TE in the nation by Rivals.com coming out of high school), who had transferred to Kansas from Florida, for the starting position. That season he earned honorable mention All-Big 12 honors after catching 13 passes for 115 yards and earning a reputation as a stellar blocker. He would more than double those numbers in his senior season with 30 catches for 363 yards on his way to earing 2ndTeam All-Big 12 honors. Prior to that season, Kansas coach Doug Meacham (whose resume includes time as TE/WR coach at Oklahoma State and TCU) was quoted as saying “I had a kid at Oklahoma State named Brandon Pettigrew, who was a first-rounder. I’m not saying Ben’s a first-rounder, but Ben is kind of what those guys (NFL scouts) look for, I think. He can do all the special teams, he can set the edge, block, and he’s a really athletic, route-running guy; great set of hands and ball skills.”

Unfortunately for the prospects at the University of Kansas NFL Pro Day, the conditions were less than ideal as the morning weather consisted of chilly, 38-degree temps, with 12mph winds and gusts up to 18mph. Among the drills that allow for an apples-to-apples comparison (though each team will have its’ own times for each drill recorded by their specific scout the forty yard dashes are timed with entirely different methods, at the NFL Combine they are electronically measured with laser-gates but at NFL Pro Days they are timed with hand-held stopwatches). For the movement drills which are tested with the same methods Johnson’s rankings relative to the 2018 NFL Combine TE invitees would stand;

The wind was a factor for the forty yard dash with Johnson reportedly running in the low-to-mid 4.8 range with the wind and high-4.9 range against it (fellow NFL prospect Dorance Armstrong ran a slower time at his Pro Day than he did at the NFL Combine, that nearly never happens unless the weather is a factor). You can see Johnson’s forty yard dashes in the video below and calculate your own times based on what you see, run one in the video is the with-wind sprint from Pro Day, run two is video from a private training session he was doing along with Baylor TE Ishmail Wainright).

According to Kent Lee Platte’s log of relative athletic scores and available Draft Scout data NFL tight ends since 1990 who put up at least 500 receiving yards in one season that had athletic testing numbers similar to Johnson include names like Tony Gonzalez, Zach Miller, Brandon Myers, Richard Rodgers, Jermichael Finley, Randy McMichael and Ben Coates. You can see the table below for the full list of numbers;

How many receiving yards Ben Johnson may tally at the professional level remains to be seen, but in the meanwhile, as you can see in the video below, he’s working hard to earn a spot in the NFL.