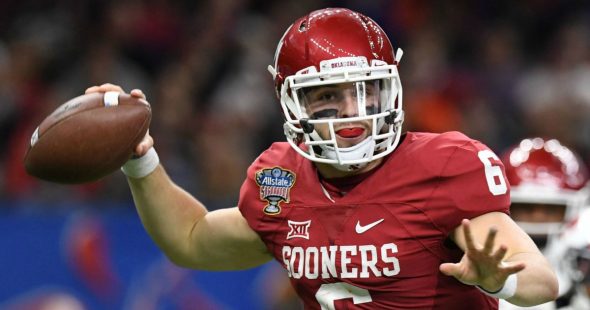 Led Lake Travis High to a 25-2 record during two seasons as the starting quarterback. guided team to a 9-2 record as a senior and to a 6-0 record during district play with a District 15-5A Championship. completed 182 of 288 passes for 2,467 yards with 22 touchdowns and just three interceptions as a senior. Mayfield passed for 3,788 yards in the first season as a starting quarterback on 247 of 378 passing (65%) with 45 touchdown passes and only five interceptions. During his high school career, Baker tallied 6,255 yards on 429 of 666 passing with 67 touchdowns and eight interceptions during that time.

As far as on the field production, Baker was far ahead of any other quarterback. Throwing for 69.5 percent completion and a 119 touchdown to 21 interceptions for his career. Baker has natural playmaking ability with his arm and legs. Plays with the fiery demeanor and a massive chip on his shoulder. Teammates rally around him on and off the field. This year he was in complete command of his offense and has improved with each season. Baker does a good job of driving through his lower body to get extra velocity on his deep balls. Very accurate on throws of 20 yards or deeper. (53) percent completion rate, as well as accurate on the run with (67) percent completion rate. Mayfield posted the highest grade (PFF) on clean and pressured in the pocket.

He is short for your typical early-round quarterback. Baker did benefit from a spread scheme which allowed him to have plenty of options to throw the ball and scheme that created large windows to throw into. Baker will tend to creep up in the pocket towards pressure at times. Ball placement will wander off when he tries to gun it into a short window. Needs to eliminate his back foot throws as well as his desire to make plays will lead to unnecessary sacks. His off the field issues is a big red flag, He continued to get into trouble and seem not to learn his lesson but is very smart with his words in his interviews. As well as to off the field antics he has on the field problems as well. Scouts don’t take too kindly to players grabbing themselves and screaming at the other bench F-YOU and stick to basketball.

He’ll be a first rounder due to the need for the position early in the draft. But his ceiling is a Russell Wilson and Drew Brees type of player but at the moment I’m going to say he reminds me more of a Doug Flutie.