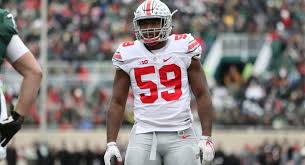 Has a natural feel and sense when taking on blocks and seeing how the play developments. Reacts to blocks quickly with the use of his hands and creating separation.

Transitions his body to make sure he is in the right place to make a play. Uses his eyes to see how the blocking is set up, single block, a double team can adjust and make sure he is keeping contain.

Displays a powerful lower body which he exhibits when coming out his stance and bringing his hips to generate power in taking on blocks. Has good initial leverage but at times can lose it playing on the inside which he was placed at during his time at Ohio State.

Has adequate hip flexibility does not display a quick twitch when opening up and turning to run to the ball carrier. Can be viewed as more of a straight light athlete with his limited hip flexibility, was asked on very few occasions to drop into the flat during certain blitz’s, seemed awkward in space.

Explosive tackler brings his hips while adding good leverage and a consistent powerful leg drive to bring down the ball carrier. 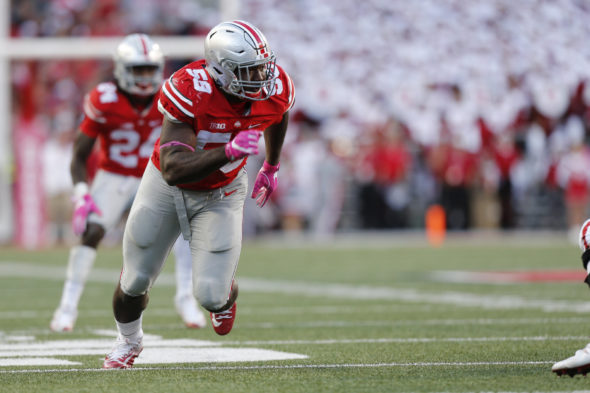 Demonstrates an aggressive playing style, has the strength to be a physical presence on a defensive line.

Has a quick initial first step, which gains ground while pursuing the play. Uses his lower body strength to pack a powerful punch to shock the offensive lineman to find the football and make the play.

Point of Attack Strength/ Hand Use

Has “heavy hands” which when he strikes he packs a powerful blow to his opponent. Uses good hand placement against the run to not get washed out of a play, has been used as “3” tech, “2” tech and even a “0” technique. Though playing inside at times he sometimes loses at the point of attack versus double teams when he loses his leverage.

Takes proper angles in getting to the football, won’t wow you with his speed but has the relentless motor to get after the ball carrier.

Displays quick hands to disengage blocks added with a powerful get off to get the offensive lineman off balance and to use a variety of pass rush moves such as the club rip, push-pull, and the bull rush that he has been seen using. When asked to go on stunts tends to lose leverage and get caught up in the mess of the play, better used in one on one mismatch situations in the pass rush.

Was used in different positions all along the Ohio State defensive front most notably for their “Rush man Package”. Can bump inside on passing downs to create a mismatch with his quick initial first step to overmatch a guard, or a defensive end using his speed to power bull rush to overmatch offensive tackles with his strength.

Lewis is a powerful defensive lineman prospect that is limited athletically in certain situations, he does have the ability to move inside on third down to provide a mismatch but wouldn’t be effective inside on earlier downs. Projects a strong side left defensive end prospect at the next level.