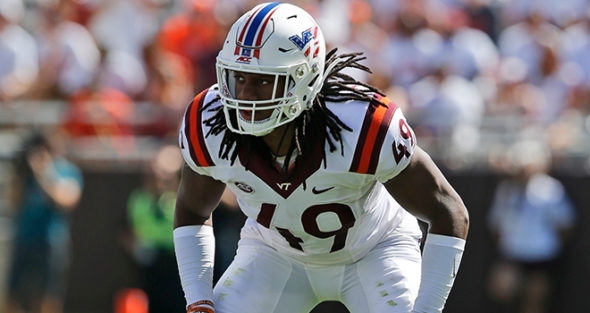 Listed as the No. 236 overall player nationally, the No. 15 outside linebacker in the country and the No. 12 player in the state of Virginia by Rivals. Edmunds missed part of his senior season with an injury but was still named first-team all-state for the Class 2A level by both the VHSL and Virginia Preps. Tremaine was also named First-Team All-Conference 37 as a Senior playing both a linebacker and tight end. All while earning Defensive Back of the Year Honors. In his junior season, Edmunds recorded 120 tackles with 17 of the tackles coming for a loss and 4 sacks.  Add the stats of two interceptions, two blocked kicks, and a forced fumble and a single fumble recovery.

Tremaine Edmunds is a great athlete, And believe it or not, He’s still growing. Edmunds who stands 6’5 253 pounds has been mentioned and compared to Brian Urlacher. Edmunds is an athlete being 253-pound linebacker and still running a 4.54 40 yard dash. Edmunds has long limbs to go with a rangy frame that he can hold his weight pretty easily. He possesses very good lateral quickness to go sideline to sideline and to run down ball carriers. Spins out of blocks to find his way back into the play. Combines length with rare reactive athleticism and agility to access and tackle opportunities from different ways and angles. He doesn’t have the instincts of a player like Roquan Smith But understands the game well enough to make the plays he needs to on a consistent basis. He will only be better and stronger, He is only 19 and will be 20 by the time his rookie season begins. The future is very bright for Edmunds and has the talent to become a pro bowler several times over.  Has length and burst to affect pocket as an edge rusher. An effective player in man cover with the ability to match shifty running backs and bulky tight ends.

Tremaine doesn’t have great instincts and I believe part of that is due to his young age. He can be a little slow in his decision making as well as be lured in by misdirection plays. Edmunds will have to try and strengthen his upper and lower body strength. (That will come in due time as he get’s older and his body fills out.) He will from time to time have a bust in man coverage from time to time, Which isn’t due to his lack of playing ability. It’s more due to his mental mistakes.

As an overall review Tremaine Edmunds as the ability to be a top 5 linebacker in the NFL. But it will take a year or 2 for his development to come in and body to fill out to see what he truly can be at the next level. He could be the best linebacker of the group coming out.

Here you can see Edmunds reading the play and reacting very well to get through the block and force an incomplete pass.

I show you this cause on the play before Edmunds bites and allows the quarterback to slide out for the pass. (It was an incomplete pass) On the next play, Tremaine doesn’t bite.

He shows a good motor and catch up speed to chase down the ball carrier for the tackle short of the 1st down.