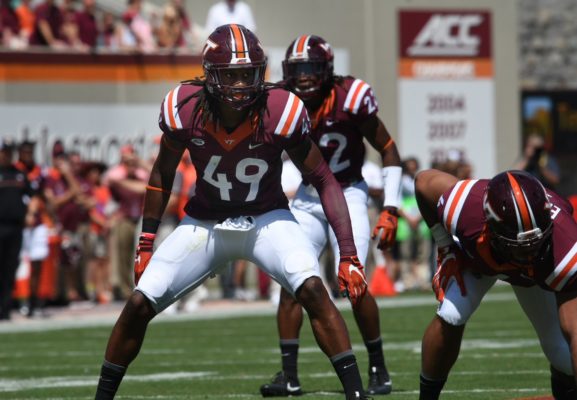 Has a natural feel for where the ball is going to be, but at times seems timid in making his reads. When in his stance he tends to lean forward, be off balance at times, and misdiagnose plays. When he anticipates a particular play, he displays his athleticism by reacting quickly and showing his closing speed.

As stated before when he is in his stance, he tends to lean forward and be off balance before the snap of the ball. When sifting through traffic during a play he shows that he can be a natural knee bender and make offensive lineman miss. Demonstrates explosive hips when stunning an opposing offensive lineman, brings his hips through his punch, and allows him to dominate his blocker.

This is where he truly displays that he can be a special player, displays flexibility in the hips and allows him to open up and run quickly. He tracks the near hip of the ball carrier and takes the correct angle versus outside run. He does not get caught up in traffic and protects his legs from the cut block by actively using his hands when running.

Although he has long arms, he sometimes lets the offensive lineman into his chest without giving a clean punch. When he does punch he displays good hand placement and extends his arms to disengage the block and find the football. Was used in different positions in Virginia Tech’s defense, as a stack linebacker, playing outside the box, and as a tilted stand up “9” technique. With that being said, his hand placement and block shedding he displayed varied, seemed to fare better when in the box rather than on the outside.

He does show the ability to be the “thumper” of a tackler at times, but for the most part he is your standard wrap up tackler. When in space he sinks his hips well and doesn’t stop his feet and drives through the defender.

He does not seem lost in space, opens up and sinks and sits in his zone. He is patient and has the discipline to not overrun his coverage, recognizes routes quickly.

Physical when locked on in man coverage, but when there is space between him and his man he seems to be inconsistent with tracking the near hip and staying with his man at times. He has the ability to run with athletic tight ends and running backs.

He displays the ability to rush the quarterback, using speed and leverage to his advantage. He seemed to have better production when blitzing as a stack linebacker than as a stand up “9” technique. When he was blitzing as a stack linebacker, he seemed to be more physical and attack downhill, where as an edge (9 technique) he just used purely speed and was washed out at times.

Edmunds is a big athletic linebacker prospect. In Bud Foster’s defense he was a versatile chess piece. With that being said, his future at the next level he is an off the ball linebacker, can be used at all three linebacker spots in a 4-3 defense and has the size to be an inside linebacker in a 3-4.