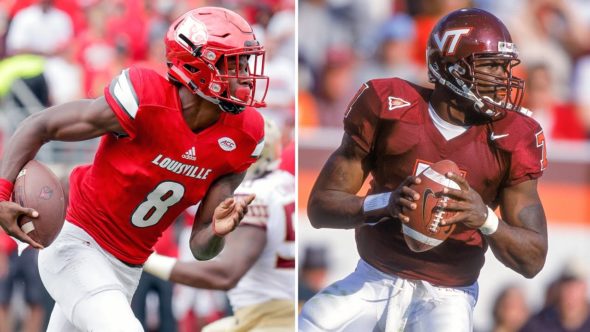 Michael Siciliano compares the Top 5 Quarterbacks in the 2018 NFL Draft to others around the league.

A highly touted prospect from The University of Southern California, Sam Darnold has all of the intangibles to become a great NFL Quarterback from Day 1. Standing at 6’3 220 pounds, Sam is what every NFL Organization wants in a Quarterback when it comes to size. What stands out with Darnold is his ability to read the field and go through full progressions. He never gets caught up on one receiver during the play, keeping his eyes down the field. Sam Darnold has the ability to make sideline to sideline throws with his power and velocity. After watching Darnold, his pocket presence is excellent. He knows when to step up in the pocket, as well as evading pressure to get outside of the pocket. He does a great job during the blitz, exploiting defenses whenever he gets the chance to. The ability to throw receivers open is an instinct that you have to be born with, and Darnold possesses that. Darnold has the ability to make plays with his feet, a strong, elusive, and effective runner, shaking off defenders. Turnovers are a lingering issue for NFL Gm’s and Executives. With 13 interceptions and 11 Fumbles, Darnold has to take care of the ball in the NFL. Cutting down on those turnovers will make Darnold a successful Quarterback in The NFL for years to come. Lastly, Darnold has a mental toughness that can’t be coached on any level. Whenever he makes a mistake, Darnold shows poise and leadership, letting that mistake go over his head, advancing to the next play.

Josh Rosen is known as the most polished Quarterback in the 2018 NFL Draft by many Analysts, NFL Gm’s and Executives. What stands out when you watch Josh Rosen play is his outstanding footwork. The ability to have a fluent drop back with excellent balance on his delivery is what separates Josh Rosen from the rest. Another advantage for Rosen is his experience to the traditional NFL style of playing under center. Multi-dimensional in that sense. A very quick release and overall great mechanics for Rosen enhance his play. Has the ability to hang tough in the pocket while facing heat. Gets his eyes down the field rather than to the ground. When the ball comes off of Rosen’s hands, it looks effortless. Everything looks easy when Rosen is tossing the rock. Hs the ability to push the ball down the field, rarely overthrowing his receiver. Accuracy is one of his strong suits as well. Confidence in oneself and football knowledge is off the charts. Uses the back-shoulder game better than any of the quarterbacks in the current class. Really can excel in The NFL with tight window traffic throws if needed. Durability and inconsistency is an issue for Rosen. One minute he is on fire, and the next minute he could be cold. Streaky thrower with below average deep ball accuracy. Rosen tends to “bite the hero sandwich” in big moments, which could either benefit him or destroy him late in games. Needs to work on his mobility and movement outside the pocket. Very close minded, which makes us question if he will be able to be a student of the game.

Josh Allen is talked about as the potential number 1 pick in the 2018 NFL Draft. Allen was never a high profiled recruit coming out of high school, landing zero offers in high school. Allen has always been an under the radar guy but has taken advantage of any opportunity given to him. Standing at 6’5 233, Josh Allen is your prototypical pocket passer in the NFL. Has the ability the shed defenders that are in hot pursuit. Best as far as pure arm talent in the draft. An avid and skillful deep out and comeback thrower. Allen has the ability to change his release based on the throw. Uses the pump fake frequently during his progressions, freezing safeties and defensive backs during the play. All 5 of the quarterback-needy teams the beginning of the draft play in poor weather conditions, Allen has experience with that. Played under center at Wyoming as well as in the gun. Excels as a play action thrower. Josh Allen has a rocket of an arm, pushing the ball down the field and in tight windows effortlessly. Throws on the run exceptionally down the field. Mobility is not an issue with Allen, can move the chains with his feet if needed. Allen has to work on his completion percentage. Instead of taking high percentage throws frequently, he does the complete opposite. Play has to be smarter on his end, as the competition rises in the NFL. Throws he would make at Wyoming, won’t necessarily be made in the NFL. Needs to work on his change of velocity during his throws. Not every ball has to be a fastball. Has an off-balance base when moving in the pocket. Josh Allen is a high-risk high reward prospect.

A Heisman Trophy winner who is a fiery and competitive quarterback. Baker Mayfield strives off of the chip on his shoulder. He lives for the big moment and strives under pressure. A former walk-on in college who has been doubted 24/7, nothing phases Baker Mayfield anymore. His leadership and demeanor attracts and rallies his teammates around him. Will be a great locker room guy for any NFL Team. A pure winner in essence, Mayfield hates to be on the losing end of the spectrum. Baker Mayfield has great footwork, with the ability to move within and outside the pocket with ease. Makes the appropriate reads with his throws, always taking what the defense gives him. When given the opportunity, he will push the ball down the field. Teams doubt his arm strength due to his stature, but Baker makes them pay. Very effective at looking off the safety to isolate and find man coverage, which results in exploiting opposing defenses. Constantly makes quick reads, as well as a talented catch and throw player. The most accurate quarterback in The NFL Draft on all three levels of the field. Mayfield’s mobility makes him extend and make plays with his feet through the air and on the run. An efficient passer in the red zone. No matter how big the stage is, Baker Mayfield will rise to the occasion. Mayfield doesn’t pass the quote on quote eye test for being a quarterback. Measured at 6’0 at the NFL Combine, which concerns teams. His release has a slight drop down which can pose a problem in the pocket with batted passes at the line. Frequently throws off his back foot which needs to be resolved in the NFL. Always looks to make the big play, could lead to turnovers and sacks.

The most gifted athlete as a quarterback that we have ever seen since Michael Vick. Lamar Jackson’s athleticism under center can impose a problem for defenses in the NFL. Top notch speed and the ability to make plays on the ground, makes defenses respect his running capabilities, which results in opening up the passing game. Jackson has a very lively arm with a flick of the wrist. Very smart player when it comes to turnovers. Will take the sack and live for another down, rather than forcing an errant throw into coverage. Open field instincts are outstanding. Jackson throws with velocity and contains a high skill of pocket presence. Not afraid to sit in the pocket and be patient when blitzes are coming. Great improviser as well. Lamar Jackson is very thin in stature which can impose durability issues in the NFL. Tends to stay in the field of play when running, attempting to make the big play. Needs to work on his base when throwing down the field. Turnovers still need to be cut down.