What we learned from Day 1 at the NFL Scouting Combine 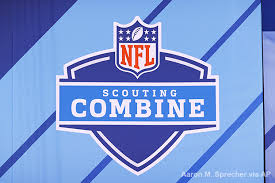 We have only had one day of on the field workouts, And there are more than a couple of 2018 draft picks that are on the way up. And as usual, there are also some players that didn’t do so well today during the drills.

(Players that did good OL)

Will Hernandez: Hernandez coming in was a top 3 interior offensive line player coming out. At the Senior Bowl, he weighed 340 pounds, At the combine, he weighed 327 lbs. It was clear that he was better with movement and footwork. With running a 5.15 40 yard dash and benching 225 37 times. As well as the way he performed doing the workouts with his hip movement, And footwork during drills I think pushed him to only behind Quenton Nelson from Notre Dame. Hernandez is a day 1 starter in the NFL.

Desmond Harrison: Harrison could be a late first round pick or early 2nd round pick if he didn’t have some character concerns that he’ll have to talk about during interviews. But he is a very physically talented offensive lineman. He ran the fastest 40 time with an unofficial time of 4.75 40 yard dash. But he was just as impressive with his on the field drills. With very good movement and very explosive.

Alex Cappa: Cappa had a very solid field workout and looked like he belonged despite not coming from a Division I school. Cappa may have established himself as a third-round prospect after today. (He could improve off that come his pro day) But I think Cappa will move inside to guard at the next level.

(Players the can improve OL)

Billy Price: Coming into the day Price was considered as a first-round pick. Price who dominated and did amazing at Ohio State as a center. Wasn’t able to participate the on the field drills. Due to a torn pectoral muscle in his chest after benching 225 just 4 times.

Orlando Brown: The All-American from Oklahoma had his stock fall today. It all started when he only benched 225 14 times for being 345 pounds. (Most all running backs did more) The next set back was when Brown ran a bad 40 with a 5.85 official time. Then last of all was during his on the field drills. Rather it was him bending at the hips and not at the knees, or not shuffling his feet during drills the proper way. It was a pretty horrific showing for Brown. Which makes scouts and GM’s go back and say do we take this performance today or do we take what he has done on the field more. 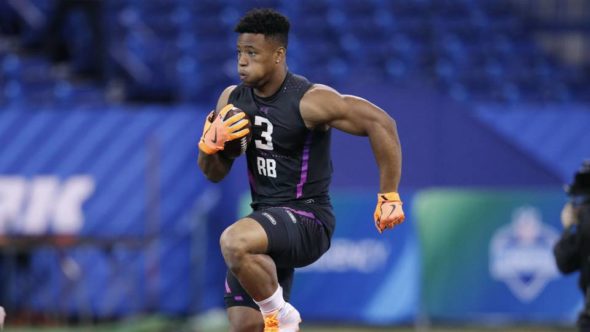 (Players that did good RB)

Saquon Barkley: We all know that Barkley would light the combine up. He’s just very physically gifted to play the game of football. Barkley weighed in at a chiseled 233-pounds which made his 4.40 official 40-yard dash quite an astonishing time for a player of that size. Barkley finished 2nd in the 40-yard dash at the combine for running backs. But finished first on the bench with 29 reps and a vert of 41 inches.

Nick Chubb: Chubb didn’t flash great at the combine, But benching 225 pounds 29 times with Barkley was impressive. Even though he posted a 4.52 40 time which was slow he did do good in the vertical jump posting 38.5 inches and in the broad jump with 10.8 feet in the broad. And he did pretty well in the running back drills.

(Players that need to improve RB)

Akrum Wadley: ran a 4.54 40 despite weighing just 194. He also posted just a 32-inch vertical. He could’ve made up for it with an impressive 3-cone time, but he didn’t bother to do that. Wadley will have to go back to the beginning and do much better at his pro day for Iowa.

John Kelly: Kelly didn’t run the 40, but we were still able to see that he tested pretty bad at the combine. He had one of the worst 3 cone drill times of all the running backs, posting a slow and bad time of 7.13 seconds. And speaking of the 40, it’s a bit weird and questionable as to why Kelly didn’t run it, seeing as he wasn’t injured.

Ronald Jones: Jones pulled up with a hamstring injury midway through his first 40 run. He’ll have to redeem himself at his pro day, but it’s a shame that he had a lost opportunity in Indianapolis. Jones also only did 9 reps of 225 pounds and had a vert of 36.5 inches and did not participate in the broad jump.

Quarterbacks to keep an eye on tomorrow:

Wide receivers to watch for tomorrow: