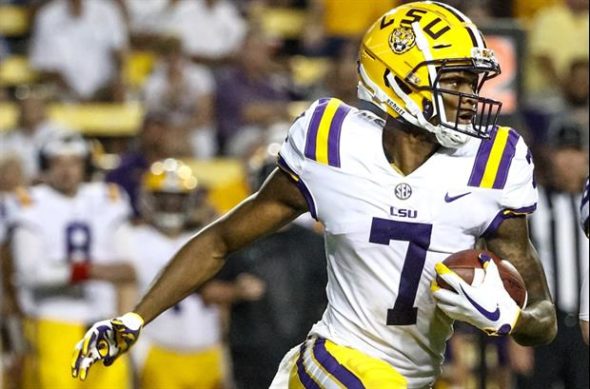 Alabama WR Calvin Ridley, 6’/189, Combine Results: 40/4.43, Broad Jump: 9′ 2″, Bench Press: 15 Reps.  Ridley’s performance should sustain his ranking as the #1 ranked WR in this year’s Draft.  Ridley is ranked so high because of his well developed Route-Running skills, NFL Route Tree ability, and the way he can set up DB’s with a sudden burst and sharp cuts in and out of his breaks.

Moving Up in WR Combine Rankings

Moving Down WR Combine Rankings/Should have performed better in Forty

Texas A&M WR Christian Kirk, 5′ 10″/201, Combine Results:  40/4.47, BJ: 10′ 5″, Bench: 20 Reps.  Prior to Combine, Kirk was projected to be one of fastest Receivers in this year’s WR Draft class.  However, Kirk only ran a 4.47/40 at the Combine today.  This 40 time should not affect his WR rankings adversely, depending who’s scouting him.  That’s because he has been a productive Receiver in his College career.  He also is a talented Kick Returner.  I would recommend that Kirk run the 40 Time again at his upcoming College Pro Day since he’s been previously clocked in the 4.3/40 range.  He may capture the elusive 4.3/40 again at his upcoming Pro Day, probably held in late March or early April.  A 4.47/40 is a very good time for a WR coming out of College, just not what he usually runs.

Boise State WR Cedric Wilson, 6′ 2″/197, 40/4.55, BJ: 10′ 1″, Bench Press: 9 Reps.  Was projected to run a forty in the low 4.5’s.  His Bench should be around 13 Reps or more.  He needs to get stronger in his upper-body for greater NFL success.  Recommend that Wilson run the Forty again at his College Pro Day.  He should get stronger over the Spring and early Summer in preparation for the NFL. 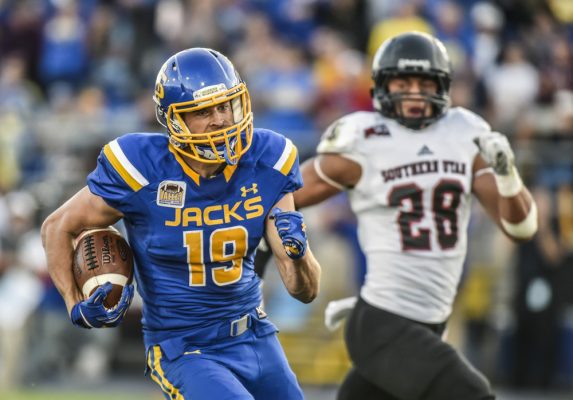 QB Josh Allen, Wyoming throws a perfect deep pass for approximately 70 Yards during his Combine Passing Drill. Allen is impressive during his Combine Passing Drills, especially while throwing his deep throws with the right amount of air underneath his balls.  He also ran a 4.75/40 to display his Athletic ability.  He affirms his status as a worthy Top 10 NFL Draft selection in the 1st Round.  Raised his draft stock even more at Combine.  I have him being selected by the Denver Broncos at #5 in the Draft.  Broncos’ GM John Elway attended Josh Allen’s Idaho Potato Bowl game, and Allen also played in the Senior Bowl which was coached by John Elway and his assistants.  Josh Allen continues to impress on all performance stages–Combine and Bowl games— continues to show off his powerful arm, athleticism and his drive to become a top NFL Franchise QB.  I really like this kid.  He reminds me of John Elway with his athletic ability, cannon arm, deep ball throwing ability, mobility, and his prowess at throwing on the run, scrambling and rolling out.  I’m not comparing him to Hall of Famer Elway, he just reminds me of Elway’s Scouting evaluation coming out of Stanford.

QB Josh Rosen,  UCLA also impressed during his Passing Drills at today’s Combine.  He also threw long accurate passes of 65-70 Yards to the Combine Wideouts in his Combine Passing Drills.  He displayed his accuracy, touch, and a strong arm.  He also raised his draft stock at the Combine.  I have Josh Rosen, UCLA QB as my #1 NFL Draft QB, and Josh Allen, Wyoming as my #2 NFL Draft QB, a close second.  I believe both will become successful NFL Quarterbacks.  These 2 QB’s are above Baker Mayfield Oklahoma, Sam Darnold, USC, Kyle Lauletta, Richmond (FCS), Mason Rudolph, Oklahoma State.  Of note, Rosen led his Receivers in stride during the passing drills, without throwing too many under-thrown balls.  Rosen is a special QB. 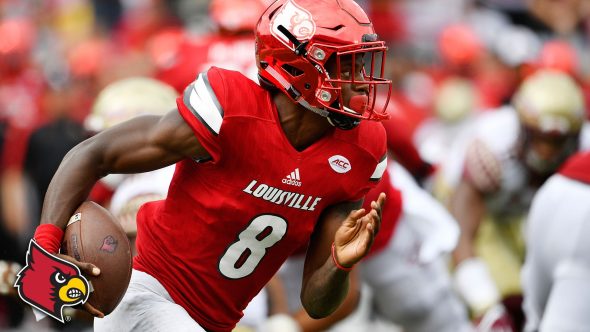 Quarterbacks’ Baker Mayfield, Oklahoma; Mason Rudolph, Oklahoma State; Lamar Jackson, Louisville did not stand out during Combine Passing Drills or raise their Draft stock to any significant degree in my opinion.  Jackson looked nervous which may be understandable since some NFL analysts recommend that Jackson should become a Wide Receiver in the NFL, instead of an NFL QB, and should perform Wide Receiver workouts at this year’s Combine.  All these QB’s were not very accurate, they didn’t lead receivers consistently, threw too many under-thrown balls that Receivers had to small down to catch, or completely stop to catch under-thrown balls.  Nick Shimonek, QB Texas Tech and Kurt Benkert, QB Virginia did not stand out and were not impressive during their Combine passing drills in comparison to Josh Allen and Josh Rosen.

If these Quarterbacks want to further impress the NFL team Scouts and Coaching staffs, they have another opportunity if they decide to attend their College’s Pro Day.

TIGHT ENDS DISPLAY THEIR SPEED, POWER, AND STRENGTH AT COMBINE ON DAY 2

Mark Edwards, TE Oklahoma and Mike Gesicki, TE Penn State set the Measurable standards for all Tight Ends to strive for at the Combine this year.

Mike Gesicki, 6′ 5″/247, TE Penn State ran a 4.54/40, Benched 22 Reps, and Broad Jumped 10′ 9″.  Gesicki will be the first or second Tight End taken in this year’s Draft.  He also has very good strength as displayed by his 22 Reps on the Bench, in addition to great Power demonstrated by a Broad Jump of 10′ 9″.  The Broad Jump is a measurement of Power, not absolute Strength.  He’s got impressive measurables for a Tight End, coupled with pass catching skills should secure him as a lock first-round Draft selection.  It’s either Penn State’s Gesicki or Oklahoma’s TE Mark Andrews who will be the first Tight End taken in this year’s Draft.

Mark Edwards, 6′ 5″/256, TE Oklahoma ran a 4.67/40, Benched 17 Reps, and Broad Jumped 9′ 5″.  Edwards, who caught QB Baker Mayfield’s passes at Oklahoma last season, put on an impressive demonstration of his of Athletic skills at the NFL Combine today; however, Penn State Gesicki shined even more with his Combine performance.   Edwards will most likely be selected 2nd Tight End taken in the upcoming NFL Draft.

Jaylen Samuels, 5′ 11″/225, TE North Carolina State ran a 4.54/40, Benched 18 Reps, and Broad Jumped 10′ 1″. Samuels significantly increased his draft stock with these impressive Measurables.  He is very undersized for the NFL Tight End position; however, some NFL team Offensive Coordinators could be creative and prepare some type of scheme for him to fit into.  He may fit into a Slot Receiver role, taking advantage of his speed and strength to over-match a smaller Slot Defensive Back, especially in weight.

Hayden Hurst, 6′ 4″/250, TE South Carolina ran a respectable4.67/40, and Broad Jumped 10′, Bench (DNP) Did not participate.  Both are impressive Combine measurables for a Tight End.

Ian Thomas, 6′ 4″/259, TE Indiana ran a 4.74/40, Broad Jump: 10′ 3″.  Bench: DNP.  Thomas will be a Top 5 TE taken in the Draft.  The Tight End position in this year’s draft is thin which is typical.  However, this year’s Tight Ends are rated high is their Measurables and Athleticism.  If an NFL Team selects any one of these Tight Ends, those teams will significantly upgrade their Tight End position and depth. 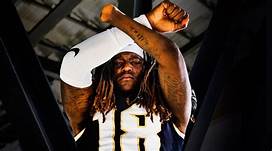 Shaquem Griffin, 6′ 1″/227, OLB UCF (Univ. Central Florida) Benched Pressed 225 for 20 repetitions with one hand. Griffin is a highly rated OLB from the University of Central Florida who had his left hand amputated when he was young.  He has become the starting Linebacker on UCF’s undefeated Football Team of 2017.  Griffin was instrumental in UCF’s College Football success at the FCS College Football level.  He has become a tackling machine at UCF while playing himself into becoming a leader of UCF’s Football program last year.  Griffin will be drafted.

This amazing report was put together by our newest writer James Watkins, Jr.