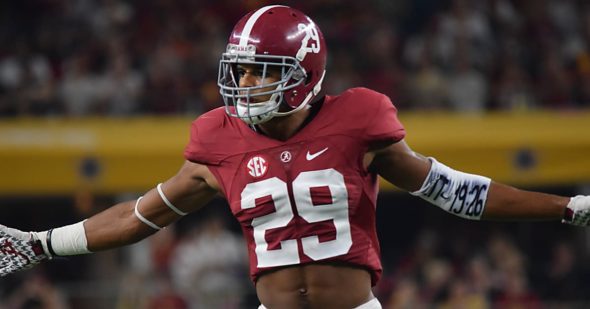 Minkah was one of the top defensive backs in the country coming into the 2015 recruiting class. He was named to the 2015 Parade all-American team and was selected to the Under Armour All-American game. According to Rivals Minkah was the nation’s number 2 corner and the number 1 player in the state of New Jersey. Had 60 tackles and three interceptions as a senior in 2014, accounted for 62 tackles with four picks and 21 pass breakups as a junior in 2013 while earning first team All-State honors (non-public) and first team All-Hudson County

Most Tide players, no matter how highly sought after coming out of high school, have to watch from the sidelines for their first year or two. Fitzpatrick got on the field right away in 2015. Nick loved the versatility and work ethic of Fitzpatrick. As a freshman, he was one of the hardest workers on and off the field. Good feet with the ability to transition backward and forward smoothly around the field. Gets to top chase speed quickly. Can become a rangy safety. Able to stick a foot in the ground and drive to the ball. Plays with “ball-man” vision of an off-ball defender in basketball. Has awareness from zone to make loads of plays

One of the most common aspects of all of the greatest players of all time is their love of the game. Minkah absolutely loves every aspect of the game, And his football IQ proves it. He knows not only what he is required to do on a play, But what his other 10 teammates are required to do to the minor detail. Dangerous blitzer off the edge. Attacks line of scrimmage from high safety look in run support and welcomes physical challenges. Special teams ace with 22 career coverage tackles.

Minkah is in my opinion, The best and safest pick on the defensive side of the ball. I think he will be a pro bowl corner but a multiple time all pro at the safety position at the next level. He runs fast enough to get to cover ground very well. As well as tackles extremely well vs any type of player. He has great ball skills as well, He has a total of 9 interceptions. Six in 2016 as a sophomore, In 2017 teams did everything they could to keep the ball on the other side of the field opposite of Minkah.

Minkah does have to learn to dial back urgency and play with more patience on the next level. Plays with some hip tightness that limits lateral agility in coverage but not so bad where he couldn’t succeed.

I have been told by a scout that they don’t see him on the level of Jamal Adams was coming out as a pure safety standpoint. But they are extremely close, But Fitzpatrick is more versatile as an overall football player. Minkah is my highest rated player in this year’s draft. He is graded on my scale of a 9.4 on a 10. Only player ever higher than Minkah was Adams and Peyton Manning. Adams was a 9.5 while Manning was a 9.7.