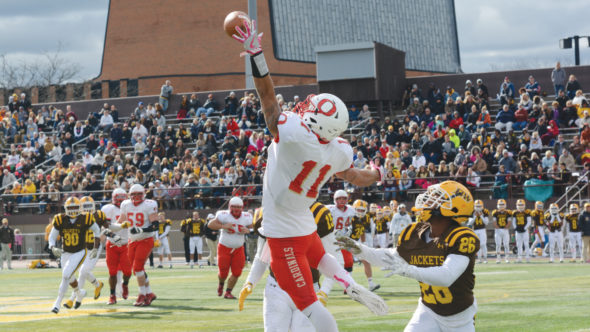 Strengths: Lowe has decent size & length for a receiver. He plays with okay speed & balance when lining up outside, or as a slot receiver. He uses his AA & agility when using double moves to create separation. He shows good mental processing when finding holes in zone coverage when running his routes. He demonstrates okay body control when making catches along the sidelines. He will fight for jump balls on deep routes in one-on-one situations. After the catch, he shows toughness & determination to fight for extra yards & open space. He displays some physicality when run blocking. He shows decent vision as a kick returner and a decent pursuit angle as a gunner on kickoffs.

Weaknesses: Lowe has adequate COD skills due to his stiff hips & lack of foot speed. He has very little burst off the LOS, and out of his breaks. He rounds off his cuts when running out, post, and flag routes. He doesn’t sit or stop in the holes in zone coverage. On short & intermediate routes, he tends to bring in balls more with his body instead of his hands. He doesn’t always attack the ball at its highest point on jump balls. His abilities against press coverage is a question.

Summary: Lowe was a three-year starter for the Otterbein Cardinals after transferring from the University of Akron. He played & started in 30 games from 2015-2017 where he was used at X/Z, in the slot, and as a returner & gunner on special teams. He was named to the All-Ohio Athletic Conference (OAC) team three times from 2015-2017, and he was an invited to both the 2017 National Bowl, and the 2017 D3 Senior Classic. Lowe has decent size & length at the receiver position, and he plays with okay speed & balance despite having stiff hips & little foot speed. While he doesn’t have much burst out of his breaks, his AA & agility allow him to use double moves to create separation. He can find the holes in zone coverage, but he doesn’t sit or stop once he’s in them. He’ll fight for jump balls, but he doesn’t always attack the ball at its highest point. Once the catch is made, he displays toughness & determination to fight for extra yards, and he shows that same toughness when run blocking. At the next level, Lowe will need to improve on his footwork, lower body flexibility, route running skills, catching the ball with his hands more than with his body, and knowing when to sit down in the holes in zone coverage. I see Lowe as an X or Z receiver in a system that attacks the defense outside the numbers, and/or down the middle.