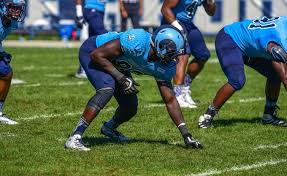 . Duncan makes plays sideline to sideline catching RBs from behind fighting off blocks using quick hand movements to beat the OL at the point of attack

– Displays Good Competitive Toughness winning with a combination of power and quickness to quickly shed blocks at the point of attack in the run game and wins with effort and leverage and finishes to the QB.

This report was conducted by Zen Bliss our coach and Arena Football Coach! Follow him on Twitter!