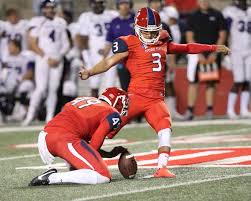 I’m from the Inland Empire in Southern California.

My role model is Eric Berry. He overcame Hodgkins Lymphoma and came back to be a pro bowler the next year. That type of courage is admirable because my dad had Lymphoma and I understand the mental and physical toll that cancer can have on a person.

Did you play any other sports

I played soccer. Still to this day I keep the door open to play professional soccer. Football wasn’t my main sport until college.

As a kicker, you try not to worry about who lines up across from you. But when you’re watching film, you’re always mindful of corners who are rushing on field goals and D linemen who are applying A gap pressure. Robert Nkemdiche from Ole Miss, Ed Oliver from Houston, Corbin Kaufusi form BYU. Some notable kickers/ punters I’ve played against include JK Scott from Alabama and Rigo Sanchez from Hawaii. 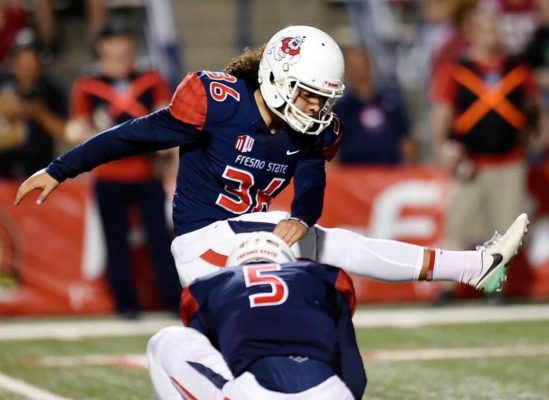 The most underrated player on my team is Josh Hokit. He does many different jobs in addition to getting carries at running back. Plays on all special teams. He was also a linebacker at one point.

My kicking style is most similar to Justin Tucker and Dan Bailey.

The hardest obstacle I’ve ever had to face was having to watch my father go through cancer treatment during my senior year in high school. It was hard because there wasn’t much I could do to help other than pray and trust God was going to take care of it.

My one pre-game superstition is not to have any pre-game rituals. I want to make sure I don’t have any specific behavior patterns before a game because if for some reason I can’t replicate it one game, I don’t want it to affect me. For a while, I was eating Cinnamon Toast Crunch before every game but I purposely discontinued that to make sure my routine wasn’t repetitive.

The most memorable play of my college career was in the Hawaii Bowl against Houston. I hit the dagger field goal to push the game to a 6 point lead late in the fourth. With that kick, I also broke the school record for most field goals in a season.

Last summer I helped lead a group of my teammates in a bible study, many of them discovering Christ for the first time.

I was a Raiders fan as a kid.

I would like to have dinner with Lebron James, Nipsey Hussle, and Barrack Obama.