Over a week into free agency, and somehow, someway, GM Howie Roseman, has done it again. Even with one of the worst cap situations, in the NFL, he and his brass has been able to add talent, to an already stout roster. Both via trades and free agency, the team has been amazing in adding talent, with the likes of WR Mike Wallace, pro-bowler DT Haloti Ngata, riser LB Corey Nelson and capping it all with the trades of DE Michael Bennett and CB Daryl Worley. As it stands, there is an argument to be made, that the defending super bowl champions, may have a better roster, than they did in 2017. With that said, if you know anything about Howie Roseman, the idea they could still be looking to add talent, isn’t too far fetched. While most teams have their sites set on the NFL draft (which the Eagles do), the birds will continue to look opportunities, to upgrade across the board. Looking at the available talent still on the market, there is a hand full of players who could interest the teams brass. 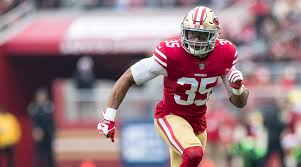 Safety Eric Reid-  Coming out of LSU, Reid was considered a legit playmaker, with potential game-changing ability. At times, the 6’1 215 LB, former 1st rounder, has shown the skill set to be just that. Capable of playing the run, a lot like an outside linebacker (a spot he has experience with), and play sideline to sideline, while roaming the field. He can play the middle and cover quicker move tight ends, slot wide-outs, and runners coming out of the backfield. There has been plenty of conversations, about why a talent like Reid, hasn’t been signed yet, something I won’t get into. But adding a player of his level, to an already stout safety pair, could help push the Eagles defense over the top. Imaging the packages defensive coordinator Jim Schwartz could come up with, with a talent like Reid.

OG/OT Luke Joeckel- OT’s Lane Johnson, Eric Fisher, and Luke Joeckel, the three names will forever be connected. As the argument across the league, was which one of the three should be taken number 1 overall? Five years into it, and it is obvious the Eagles, got the right one (Johnson) now that he has become arguably the best tackle in all of football. While Johnson and Fisher, has become franchise bookends for there perspective teams, Joeckel, has not really hit his stride yet. After failing to become the star expected of him in Jacksonville, he spent a year in Seattle. A team (Seattle) that has struggled to find a legitimate starting five, hasn’t been knocking Luke’s door down to sign him, so that isn’t a good sign. Although he hasn’t lived up to the hype, the talent is there. What the Eagles have that other teams don’t, is the best offensive line coach in football (Jeff Stoutland). Still young, Joeckel has the potential to be a star, with good movement in his feet. A strong punch at the line of scrimmage, and good athleticism. Something the coaching staff in Philly’ covets in there offensive linemen. While the Eagles have arguably the best offensive line in football, adding talent to talent, is always a good idea. Coach Stoutland has the knowledge, too take the clay that is Luke Joeckel, and mold him into a franchise tackle.

Tight-End Richard Rogers- What was once a legit strength for the Philadelphia Eagles, has now a real hole, that needs to be addressed. The team houses one of the better TE’s, in the NFL in Zach Ertz, but after that is a bunch of questions. UDFA TE Billy Brown has the skill set to be a dangerous receiver in the Eagles offense. But if you want to play for Coach (Doug) Pederson, in his offense, you need to be able to block. Luckily according to Turron Davenport, of Eagles Wire, Brown has spent the season, and this early offseason, working on his blocking. If that can be improved the team would really have something. Even when that happens, the need to add a veteran presence, and talent to there TE room, looms. Enter, ex-Green Bay Packer, Richard Roger. A solid blocker, with good hands, and a good route runner, the “not so fleet-footed” Rogers, is built more in the mold of Brent Celek, then a Zach Ertz. At 6’4 257 LB’s, Rogers has the size most teams covet and has the tools, to be a real contributor for any team. He is only 26, so he could grow along with franchise QB Carson Wentz, for years to come. Another nugget that would attract the Eagles brass, is his willingness to play in all special teams. Adding his talent would go a long way in filling a hole created this early offseason.