You see it every year. What was once considered a strength for an NFL team, almost seemingly overnight becomes a weakness. Rather it is via free agency, trades, or cap casualties, no player, or position is safe. Even the defending champions are not safe from this yearly practice, despite having one of the deepest rosters in all of football. In this case, what was once a real strength, has become a giant hole in the middle of there offense. The TE spot, lay void of depth, after (soon to be all pro) Zach Ertz, after releasing longtime fan favorite, Brent Celek and watching 3rd stringer Trey Burton, the runoff for presumably greener pastures. While the team loves the potential UDFA TE Billy Brown, brings to the table, the front office needs to replenish what was such an important part of Coach Doug Pederson’s offense. With the team’s cap space being a bit strapped, and the constant wanting to add talent, threw the draft, we figured it best to look at the talent. Luckily the 2018 draft, is filled with potential studs, at the TE position, that could interest the birds’ front office, and fill the current need.

Side note: I had already mocked Stanford TE Dalton Schultz, to the Eagles, and even though the team has shown interest in him. I have left him off of this article, to give you more information, on different prospects. 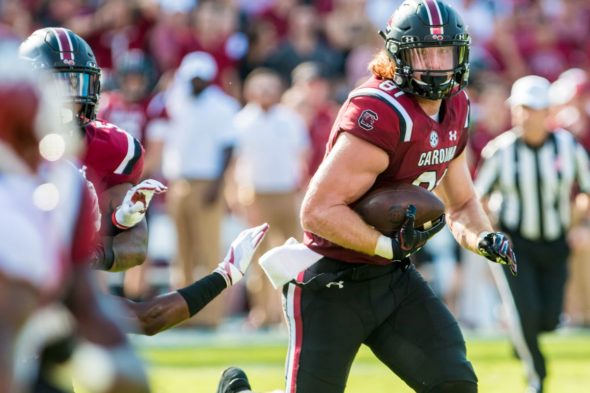 1) TE Hayden Hurst (South Carolina)- At 6’4 250 LBs’, good speed, a strong run blocker, and a great route runner, it is easy to see why NFL execs, are excited about the former Gamecock. Considered this year version, of a “can’t miss” TE prospect, Hurst could be a real option at the end of the first round. His skill set would be a solid compliment, to Zach Ertz, and the potential of the two on the field at the same time could create some real matchup problems. Adding a talent like Hurst, would go a long way in helping the Eagles offense, be as dominant as it was last season.

2) TE Jordan Aikens (Central Florida)- Aikens would be a good addition this year. Watching the tape, and meeting him in person, it’s hard not to compare him to Trey Burton. Considered more of an H-Back, then a pure TE, the 6’3 249 LB, prospect, could be a real weapon for Coach (Doug) Pederson’s offense. Although he is considered a receiving type, more than a blocking tight end, Aikens posses the skill set, the birds look for in their players. The issues he does have in the run game can be coached up, much like Burton, in his rookie year. He also has experience on all four cores of special teams, something the front office covets.

3) TE Troy Fumagalli (Wisconsin)- Troy Fumagalli, reminds me of newly released (and Eagles legend) Brent Celek. Strong hands, tough at the catch point, sneaky athletic, and arguably one of the better blocking prospects. With good size (6’4 255), Fumagalli has shown his route running to be a strength and is capable of being a matchup problem for less athletic players. Adding him to the Eagles offense would give them a solid number two, that would serve both as a pass-catching threat and solid run blocker.