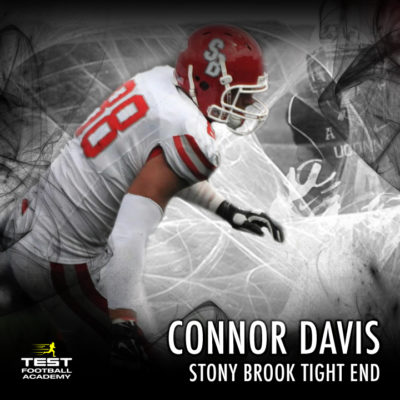 Q: What is your name

Q: What is your height and weight

Q: What school did you attend

Q: Who do you try and mold your game after

A: Growing up I tried to model my game after was Todd Heap. A more traditional Y tight tend that you could attach to the line in the running game and also use their size and athleticism to make mismatches in the passing game.

Q: What was your most memorable moment/ experience in college

A: The first game of the year against USF. They were starting the season off as the No. 19 team in the country and it was awesome playing in Raymond James Stadium. Even though we lost it was very competitive being tied in the 4th quarter and I was able to grab a couple catches in the game and make an impact on opening up some holes on the ground

Q: What type of a Tight End would you consider yourself to be

A: In college the run game was always a big part of our game plan. So the years I was a tight end I was utilized a lot as a blocking tight end. However, overall I strive to be a balanced player maintaining my athleticism with my size in order to be a potential weapon in the pass game.

Q: What was the biggest obstacle to overcome and how did you face it

A: Sophomore year I tore the MPFL in my left knee while playing defensive end in the second week of the season and it ended up finishing my season needing surgery to fix it. The way I faced it was to put my head down and increasing my effort across the board. Which allowed me to heal very quickly through therapy, and continue my road to success in my school work and overall to come back stronger and better than before. (Very next season I was moved to right tackle and played every game.)

Q: Who was the hardest player you played against

A: Freshman year played Buffalo and it was Khalil Mack’s senior season. He set the bar for what level I needed to strive to be able to block as I progressed in my career

Q: Who was your role model and why

A: My dad, He didn’t come from a lot in his childhood and has continued to push forward and strive to do everything in his power to help me succeed in my aspirations. He has really inspired me to understand what it takes to achieve what you want.

Q: If you could change one aspect of your career what would it be

A: I don’t know if I’d change anything. Even the injury, It was those challenges that took part in developing the mind set and work ethic I have today towards achieving my goals. How many people can say they played both tight end and defensive end at the division 1 level in a single game.

Q: What was your favorite subject in school

A: Biology, Which is actually what I ended up majoring in during college

Q: Who is your favorite team

A: Growing up a little outside of Baltimore I gotta say the Ravens.

Q: Who was your favorite teammate at college

A: The entire tight end unit as a whole. We were all really close and it made it easy going out to practice each day and doing 6 a.m workouts getting to hangout with those guys

Q: If you could go back and tell yourself something 4 years ago. What would it be

A: I would tell myself to really enjoy things while they’re happening. I’ve learned to do that as I’ve gotten older, But early in my career I would sometimes look at the big picture in the future instead of looking no farther than the end of that day and extracting everything I could from each of the day’s moments