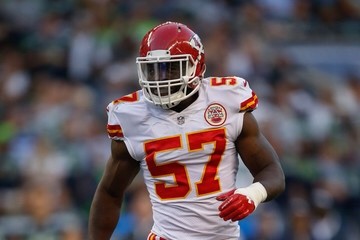 We are learning that former Boston College linebacker Kevin Pierre-Louis has signed a deal with the New York Jets.  Pierre-Louis was drafted by the Seattle Seahawks in the fourth round of the 2014 NFL Draft. Last season Pierre-Louis played on the Kansas City Chiefs.

Pierre Louis is an exceptional athlete, that appeared in 34 regular-season games with one start for the Seahawks before he was traded to the Chiefs for linebacker D.J. Alexander. He had 43 total tackles playing outside linebacker for the Seahawks.

Pierre-Louis, 26, played in 13 regular-season games for the Chiefs, plus their playoff loss to the Tennessee Titans, all as a backup. Pierre-Louis was a nice surprise in 2017. He performed well in a rotational role at inside linebacker. He plays well in coverage and is a good tackler. The Jets will be adding a very solid and athletic player to their roster. Pierre-Louis visited the Jets and the Bears in free agency before ultimately choosing the J-E-T-S, JETS, JETS, JETS!

The deal is a 2 year deal worth 6 million with 2.5 million in guarantees!