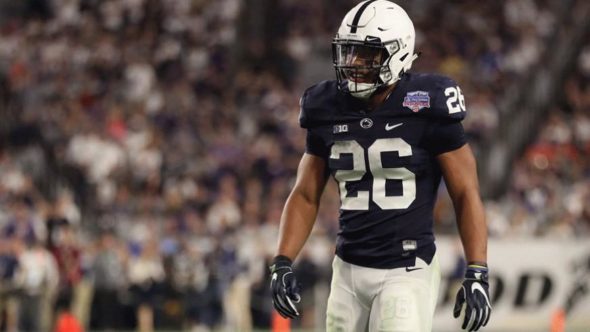 The combine numbers speak for themselves. Saquon Barkley has been the talk of the offseason this year. Barkley is noted as potentially the best athlete in this year’s draft class. He is also recognized as the “safest” pick. What you see on film is what you will get from Saquon Barkley. Known for his elusive and sharp cuts, as well as jumping over people in the open field. Saquon Barkley is a jack of all trades when it comes to a running back. Barkley’s frame carries a lot of muscle which is attractive to many scouts who are evaluating Barkley. Some have compared his build to a “Mack Truck”. He runs with exceptional pad level, with impeccable footwork in between the tackles, as well as in the open field. Barkley’s vision is what really stands out to me. The ability to exploit cutback lanes is vital in the NFL. Barkley can catch passes effectively out of the back field, making him multi-dimensional. Barkley imposes a problem for linebackers in coverage against him, as well as safeties. Barkley can also do damage in the Kick Return game. Character and personality are a strong suit for Barkley. Overall, Saquon Barkley is a freak, and will instantly make a team better from Day 1.

A freak of nature. James was known as one of the most impactful defenders at the college level, and that should continue in the NFL. To be drafted in the first round as a safety, you have to be able to check off every box. When it comes to height, weight, and speed, Derwin James hits all of those marks. Derwin James has outstanding range on the back end, making it difficult for quarterbacks to push the ball down the field. While being productive on the back end during the passing game, James makes plays in the running game as well. The ability to scream down into the alley and hit effectively is what separates James from many safeties in this class. James is a guy who can do it all. You can line him up at safety, corner, nickel back, linebacker, or off the edge. Derwin James can play anywhere on defense, which makes defensive coordinators in the NFL so high on James. A savvy Blitzer with unbelievable speed and athleticism off the edge. Ball Skills are a strong suit of Derwin James. Lastly, Derwin James is an “Alpha Dog” in the locker room. He will go the extra mile by watching film on the weekends, trying to help himself as well as his teammates in any way possible. James demands perfection out of himself and his teammates. Derwin James will be a high-profile defender in the NFL for years to come.

Tremaine Edmunds has a unique frame of his body that has NFL Scouts intrigued. Edmunds is very long and rangy for a linebacker. His lateral quickness is incredible when it comes to scrape and fill as a linebacker. Edmunds never has stagnant feet, his feet are always pumping and churning like a piston. Being 6’5’’, Edmunds uses his size and range to his advantage. He is always making plays in the open field, with the ability to close on runners and cover large amounts of space with ease. Edmunds is a guy who can get sideline to sideline without any problems. Can take on blocks with force, allowing him to shed or spin-off of them, resulting in Edmunds staying within the play. Has great vision when it comes to reading blocking techniques and open gaps. Athleticism is used to make plays that are simply unconventional to your average linebacker. Rarely misses tackles, always finishing plays at a high level. Edmunds makes plays in the running game, off the edge, and in coverage. The ability to run with tight ends and running backs in the open field helps Edmunds case as the best linebacker in the 2018 NFL Draft. This is a rare and elite talent that will be poised to be the next big thing at the linebacker position. Athletes like Tremaine Edmunds don’t grow on trees. Teams that pass on Tremaine Edmunds will pay. 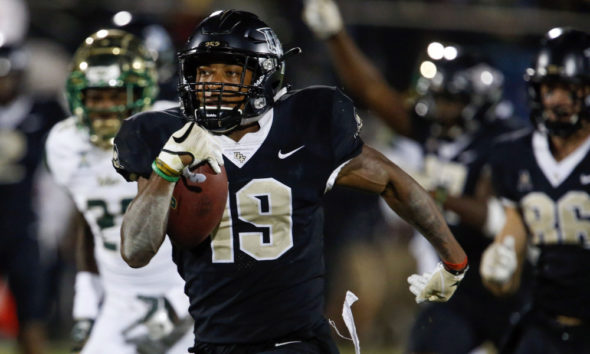 Do not let the size of Mike Hughes fool you. Mike Hughes has a remarkable journey during his college career. Started out at North Carolina and played very well there. Violated team rules resulting in him being dismissed from the team. Hughes then won a national junior college championship at Garden City in 2016. Finally, he landed at The University of Central Florida for the 2017 season. Hughes did not take any time from making an impact on the field. Ball skills are one of the best out of all of the defensive backs in this year’s draft. A very physical corner who imposes a problem on wide receivers. Tracks the ball in the air like a receiver. Closing and breaking speed on the ball is exceptional for an undersized corner. Has the ability to run down deep balls with no problem. Should be able to run down the field with any receiver in the NFL. Makes plays in the return game. Makes one tackler miss and from that point on, Hughes is off to the races. Can return punts and kicks in the NFL. Mike Hughes will be a treat for any NFL Team that drafts him. 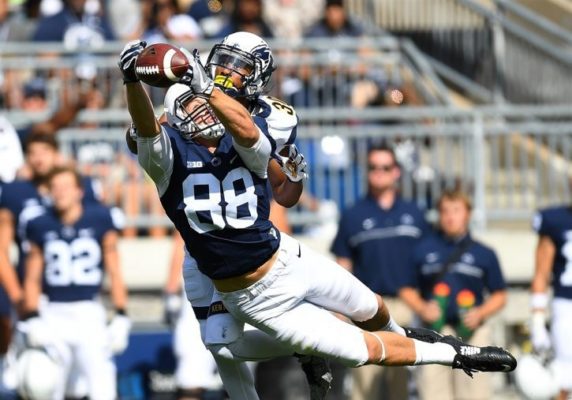 Taller than Calvin Johnson. Stronger than Donald Penn. Faster than Antonio Brown. Jumps higher than Odell Beckham Jr. Have you ever seen a tight end with these combine numbers? It’s so uncommon to see a tight end with the size and numbers of Gesecki. People were familiar with Mike Gesicki out of Penn State, but now everyone knows who exactly Mike Gesicki is. Gesicki is an outstanding athlete at the tight end position. He imposes a problem as a vertical threat to opposing defenses due to his length and speed. Great ball skills. Willing to go up and get it at the ball’s highest point. Very smooth route runner with exceptional releases off the line. Runs like a traditional receiver at the tight end position. Gesicki is a matchup nightmare for linebackers and safeties in coverage. Catch radius is long and remarkable due to his 34” arm length. Gesicki can go across the middle confidently, making big catches in traffic. Leaping abilities are amongst the best out of all tight ends, due to his volleyball and basketball background. Creating separation is never an issue. Mike Gesicki will become a problem for defenses in the NFL.