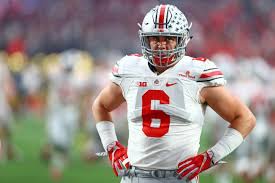 Ohio State is well known for producing very good defensive lineman and edge rushers. They have another one here in Sam Hubbard. Hubbard has the build for the OLB position in a 3-4 scheme standing at 6’6 265 pounds. He does have the ability and versatility to play 4-3 DE. There isn’t anything special athletically about Sam as others in the past like Joey Bosa. But Hubbard has a non stop motor. He looks NFL ready from a technical standpoint but as far as athletically no. But he does get the job done.

Very raw, From a small school that needs time. Big and long football player. Pop on first contact in run game and as pass-rusher is special. Not many edge defenders even in NFL have his tools. How ever Davenport being raw showed at the Senior Bowl where he was only able to win on 38 percent of 1 on 1 battles.

Flashed dominant potential at times. Took over the Notre Dame game early in season with eight pressures. Dropped into coverage frequently in Georgia’s scheme. Only rushed the passer on 192 snaps this past season. Elite length. Doesn’t always use it well, but when he does he can keep himself clean. Height wise is great at 6’6 but only 243 pounds he should put on some weight.

As twitchy an athlete as you’ll find in this draft class. Would at times beat college tackles with no more than his first step. Bend around the edge is elite. Can dip and play at an angle with the best of them. Flashed speed to power, but strength is still an issue. Tad undersized and could be seen as a designated pass-rusher. He’s not much of a hands fighter as a pass rusher, though he knows how to work his hands on his rips and outside moves.

Explosive out of his stance. Can press tackles up field shoulder and get them off balance. Struggles turning the corner. Even when he gets the edge on tackles, he often can’t turn back to the QB. Never truly dominated a game from start to finish. Was held without a pressure in two separate games this past season. Sweat will be more of a development player or a backup in the NFL.

Agility that is immediately apparent on tape. Can stop on a dime and change directions during his pass rush. Nwosu is undersized for the position. Has to be on the edge and may even be limited to designated 3rd down pass rusher. Had an incredible 10 batted passes this past season. One year wonder, Had three sacks and 43 total pressures to his name in three seasons before 10 sacks and 63 pressures this season

Took a leave of absence from LSU for personal reasons last spring and came back in the fall a tad heavier and slower after shoulder surgery. Freakish body control for his overall size. Could pass as a wide receiver his sophomore year the way he could dip and change direction. His rip move is his go to move to get off blockers, but his  bull rush technique is still a work in progress. Arden Key as all the tools to make it work in time though. However Key seems to be uninterested at times versus run, Struggles to hold the point against powerful tackles and can get out leveraged.

Finished with 21 in 3 seasons.

Finished with 8 sacks and 42 total pressures in 3 seasons. ( Very RAW)

Finished with 23 sacks and only 5 missed tackles in 3 seasons.