Notice: Trying to get property of non-object in /home/nfldraftdiamonds/public_html/wp-content/plugins/wordpress-seo/frontend/schema/class-schema-person.php on line 152

Notice: Trying to get property of non-object in /home/nfldraftdiamonds/public_html/wp-content/plugins/wordpress-seo/frontend/schema/class-schema-person.php on line 230

Notice: Trying to get property of non-object in /home/nfldraftdiamonds/public_html/wp-content/plugins/wordpress-seo/frontend/schema/class-schema-person.php on line 236

The NFL Draft, is in no way, an exact science. Scouts study every single piece of evidence, they can get there hands on to make sure they have the best information for there respective teams. Poking and prodding each individual, testing him physically, mentally and emotionally. Fans go on and search there favorite prospects highlights, and fall in love with there select few. While the media falls in love with a hand full of players, that garner all the attention, which leads to draft day. If the player (s) that had been the object of affection, by the media and fan alike, it feels like the world is falling. When in all actuality, the draft is smothered in NFL talent, some of whom, won’t even be drafted. Be it because of a small school bias, a lack of game film, or a scout not being able to picture these players, doing something different, in a different scheme. The one thing that we all see happen every year, some kid becomes a star, that happened to be the tenth selected at his position. Or the prospect goes undrafted, and becomes a steal, as they not only succeed but become difference maker’s in the league.

There are tons of examples of this. This year alone, the Philadelphia Eagles, had RB Corey Clement (Undrafted), cap off a great season, with over a hundred yards receiving in a super bowl victory. A performance, in which had it not been for QB Nick Foles (3rd round selection), could have been the M.V.P. The point to it all is the Draft is not an exact science. We decided to look at the draft as a whole, and are attempting to select a few players, who may not be getting the attention that other’s are getting, but could be a revelation at the next level. 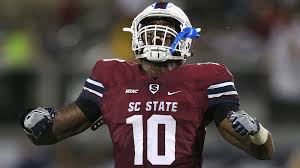 LB Darius Leonard (South Carolina State)- To me, this one seems too obvious. 6’2 230 LB’s, and all instinct, Leonard, has gotten attention from scouts, but the lack of media love is alarming. A true sideline to sideline backer, he has the tools to be a difference maker at the highest level. Think, Detroit’s Tahir Whitehead 2.0, as he has the speed to chase down runner’s, and the strength to set the edge, and shed blocker’s, on his way to disrupting plays. He adds value to the passing game, both in coverage (Tight Ends, Running Backs) and while blitzing. most won’t say it, but due to his competition in school, he will not get the attention deserved.

LB Nick Deluca (North Dakota State)- QB Carson Wentz, helped put a larger eye on, North Dakota State, despite it already being one of the most successful programs in football history. Even with all the talent coming out of that school, it is still a surprise when a team draft‘s a guy there. This year isn’t any different, LB Nick Deluca will be the next contributor to the prestigious program. Making a team very happy in the process, as the 6’2 245 LB stud has all the tool’s to be a star at the next level. He is built to play inside, and blow up run games, and despite not being the fastest player, he has the smart’s to keep him in position. With terrific angles, and the attention to detail of a 10-year pro, Deluca, could be some lucky teams pro bowl LB for the next decade.

WR Jaleel Scott (New Mexico State)- 6’4 215 LB’s, Strong hands, quick in and out of routes, get’s separation at the top, and has the tenacity to play in the middle of the field (where the big-hitting is done). Scott isn’t a player garnering a ton of attention, and for good reason, he did not have great numbers in college. But when you put on the tape, you see a guy, who can play both slots, and outside the numbers, and has the ability to take over a game. As one scout told me “He is a player that has been under the radar, and I hope he stay’s that way, so we can land him. He could be a steal, with his potential…he could be a star”. High praise, for a guy not getting any attention in the national media.

DE/DT Taven Bryan (Florida)- Bryan could be a different story, from the first three mentioned. He has slowly gotten media attention, and could be looking at an uptick, and deservedly so. The part that confuses me about the young prospect, is he played collegiately at a big school (Florida), usually, the attention is surrounding players out there. But, for some reason, he isn’t getting the love. At 6’4 300 LB’s, he has great size, and athleticism, and has had moments of dominance in college. He has drawn the comparisons, to J.J. Watt and Derek Wolf, but when you put on the tape, you see a little more Fletcher Cox, when playing to his potential. He has the thick base and strength to kick inside and help on the run while attacking the QB. And a great first step, that helps him keep offensive linemen off his body. As it gets closer to the draft, I believe he will get more attention, but until then, go watch the tape.

S Kyzir White (West Virginia)- White is 6’2 220 LB’s, hits like a middle linebacker, and run’s like a corner. Has great instincts, breaks down a play, and strikes. To me, that sounds like a starting strong safety in the NFL, but once again, he isn’t in the conversation as one of the top 5 safety prospects. He will be a starting Safety for some team very soon, attention or not, the kid is just a player. Great tackler, great balance, playing inside in the slot and has the raw speed to cover wide-outs deep. He is a true center fielder, with the tools, to play a slew of positions.

CB Holton Hill (Texas)- Hill is a victim of assumption, he was suspended for the last three games of the season, so the once highly touted prospect is assumed to fall down draft boards. Honestly, we don’t know what’s going to happen, but for him to disappear from the conversation, is a shame. Before it all fell apart, the 6’3 200 LB’s prospect, was considered one of the most talented player’s In college. He is blessed with the size, speed, and football acumen, that scouts covet across the league. If things can get figured out, on his off the field issues, Hill could end up being one of the top CB’s in this year’s draft.

I could do this all day, as there are literally tons of player’s whom deserve the attention, some of these top guys get. If you like please message me on Twitter @JonM_Salter and we can discuss some other players. Or if you have a player you feel isn’t getting the attention deserved. I would love to hear about it.