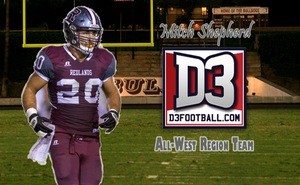 I played at University of Redlands

My dad. He’s been a consistent model of hard work and how to be a caring family member and friend throughout my life.

Ms. Isaacson. She was my kindergarten and 2nd-grade teacher. She was unlucky to have me as a student twice, but I was grateful to have her twice. As a young, energetic and difficult student, she would always reason with me and show me love and support.

Yes. I played soccer, basketball, and baseball before I ever started playing football in high school.

In high school, I played against Zack Lavine for 3 years. He was the most talented athlete (in any sport) that I’ve ever had to guard

The most underrated player I played with in college was Aaron Mandell. The guy is undersized for a cornerback, though he more than makes up for it with his feel for the game and nose for the ball. It should be mentioned that he hasn’t been overlooked by everyone as he was Jewish All-American in 2015

Ruff Ryders Anthem by DMX is a classic. I’ve been listening to that song before games since high school

One guy, I look up to and try to mimic in many ways is Brock Coyle. I admire him because he’s a smaller school guy (Montana) and was able to prove himself in his pro day and beyond after initially being overlooked. I now watch his film from college, his workouts, and in the league as well. My dad’s side of the family is all from Montana so I’m always biased for a guy who went to school there 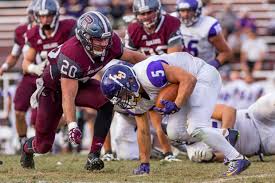 My biggest obstacle for me was being suspended from school/football my freshman year of college. I made a mistake to land myself in trouble, and I knew it was no one’s fault but mine. It took time for me to truly accept this reality, move on, and become a better person.

At the University of Redlands, our locker rooms were very crowded, so I would tend to get dressed and go somewhere quiet like the weight room or hallway before we went on the field.

The single most memorable play was the first defensive snap of my last home game in college. The opposing quarterback tried to thrown a seam pass over my head which I got underneath, leaped, and made a one-handed catch.

I was part of a program ran by my good friend, Pat Neville, called Breakfast with Bulldogs. Every other Tuesday we would go to Victoria Elementary in San Bernardino and play with these elementary school kids, and read books with them at the start of their school day. It is a rewarding experience to be able to impact the life of a young kid in a positive way.

Seahawks. I’m a big fan to this day. I even have a Seahawk tattooed on my arm.