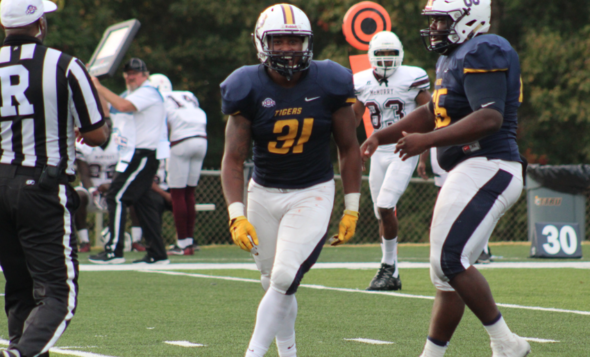 Middle Linebacker, Outside linebacker, DE and Nickle back

My father because he has always been there for me and raising me to be a great man. He has shown me the paths to take and not to take and I really appreciate him for that guidance. He is also the person who introduced me to football and provided everything he could to make sure that I was successful in the sport. I work hard to make him and my mom proud.

Susan Penick. My 9th-grade biology teacher. She saw potential in me that I didn’t even see in myself and took it upon herself to call me out on it. She gave me tough love but I considered her my school mom. She stayed with me and pushed me just as hard as my parents did at home.

Yes, I ran track and a state powerlifter. I also played basketball for a while. I believe that a true athlete can do multiple sports. So I did sports that would help me and carry over into football.

I’ve played against a lot of great players but the hardest I would have to say I faced was Joe Bergeron. Former Texas Longhorn and Texas A&M-Commerce running back. I was a true freshman linebacker at the time and had to face him. He had to be one of the toughest runners I’ve ever had to tackle. I had to be the man in the gaps facing him.

Zacchaeus Bo Walker. We both are smaller guys but play big guy positions at linebacker and defensive end. I feel like Zack is the most underrated player on the team because he has so much passion and heart for the game but doesn’t receive a lot of recognition. I know that position all too well. I enjoyed playing with him and I believe he’s going to do some great things for ETBU his senior year.

There are LOTS of songs that I listen to before big games but the one song that is a must is “Set if off by Lil Boosie.” For some reason, that song triggers a monster mentality that I take onto the field with me. Off the field, I’m a goofy outgoing guy. But on the field, I’m a completely different animal. 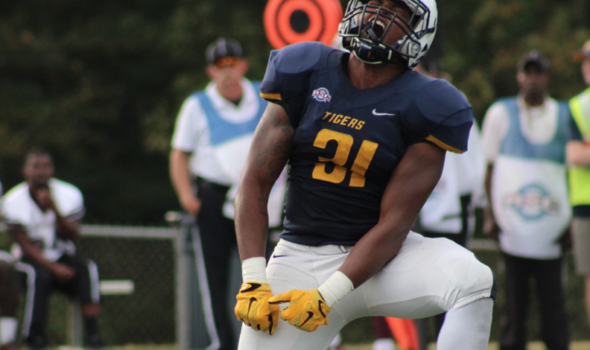 Ray Lewis of course. I modeled my entire game after him. The passion, the effort, the relentlessness, the leadership. I’ve looked up to Ray Lewis since I was 5 years old and did all I could to be myself but also mix his style of play with mine. They called me baby ray back in high school and I thought that was an honor.

The biggest obstacle I ever had to face was losing my grandmother. My grandmother was my rock, my go to, my everything. In 2009 her breast cancer returned and we lost her. That was really hard for me especially going into high school. I kind of went into a dark space and shut out the world but I used football to bring me out of that place in my life. I got closer to God and I learned to use my pain in my athletic abilities. My drive for competing grew because of my grandmothers passing.

I have a few. Before the game, I will walk the field, stop on the 31 Yard line because that’s my number, then pray to God. In the locker room, I always sit in my locker and read a chapter out of my bible and meditate on my assignments and my job to help the team. I then write a scripture on my wrist tape along with my grandmother’s name. Also, on my tape, I write 100%. That motivates me to give all I got no matter what the score is or how tired I am.

The last tackle on my senior night. I came off the edge and got a huge game-ending sack. I had been through a lot during my collegiate career but that tackle canceled out all of the negatives I endured. It felt great to finish my career at home in front of the fans and my family with that tackle.

Over the summer I saw this kid with a lawnmower attached to his bicycle. He had been riding around trying to mow yards for some money but had no more gas and I could tell he was exhausted. I pulled over talked to him and gave him money for gas and some snacks since he was out in the hot sun. I recorded the conversation and posted it on my Facebook asking people to give him a lawn to mow. The video went viral. Thousands of people even all over the world began contacting me and sending him school supplies, clothes and all kinds of things. There was even a lady who drove 6 hours just to bring him a brand new bike and school money for him and his family. Seeing his face and his family smile was the reward for me. I enjoyed the entire experience. Even to this day, I keep tabs on the kids and his family.

Baltimore Ravens! It was tough being a Texas kid but loving a team on the east coast. My entire family is Cowboys fans so it made family gatherings awkward. But I’m a die-hard Ravens fan to the fullest.

Jesus would be the first person of course. Second would be my grandmother and third would be Martin Luther King Jr.