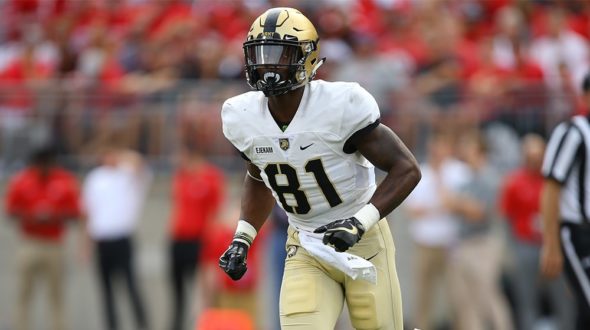 I have several: my family (father, mother, sister, brother) have all molded me into the man I am today. Without them I would not be where I am in life. My mentors Montrell Lowe, former Purdue RB standout, and Jason St. Luce have helped me throughout my athletic career as well as guided me through my decisions for future endeavors. COL Holly West, who has been my mentor at the Academy and has truly connected and taught me a lot about the institution and with my development as a future officer. CPT Gerren Alexander & MAJ Jude Onwuanumkpe have both sponsored me and taken me into both their families as if I was their own son.

CPT Jeff Salem. Has helped me through a lot and been so accessible at nearly any time of the hour to help me with my academic work.

I played basketball for 10 years, ran track for 4 years, and played soccer for a year.

Denzel Ward (Ohio State)- very strong, smart, and had some of the best ball skills I have seen. Played the cut block the best out of any of the DBs I ever went up against.

Back-up QB Kelvin Hopkins Jr. He ran the 2-minute offensive so well and when his number was called always capitalized. Being a triple option offense we do not through the ball 20 times a game, but when it was time for the 2-Min offense, Kelvin was always ready and delivered just like he did in the Temple game.

Andre Johnson and/or Anquan Boldin because they are both big frame, big size Wide Receivers like me. They are also very physical Wide Receivers which you honestly don’t see very much anywhere. Possession receivers like myself but have deceptive speed. They catch everything thrown to them and use their frame to their advantage. They are also extremely hard working people as well.

The death of my brother and teammate Brandon T. Jackson. I have dealt with many deaths in and out of family but this one honestly hurt the most. He was an incredible football player and even better teammate, friend, and brother. The only way I was able to overcome it was the help of the rest of the brotherhood and the band of brothers on that Army Football team. We came closer than ever and knew we had more to play for than ever. Also, knowing who Brandon was, I overcome it because I knew he would not want me to sulk but to honor him in everything I do. 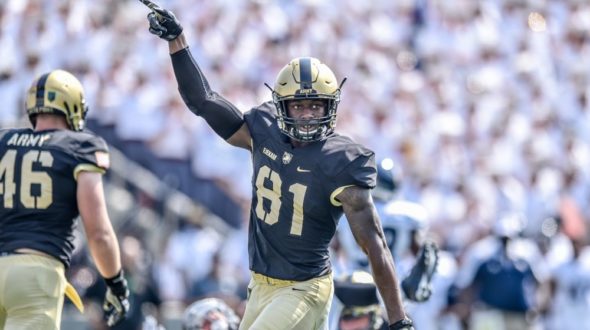 Listen to my Game Day playlist, pray, dance, and have to eat a pack or more of fruit snacks.

Sealing the edge on a toss play on the game winning 2-point conversion in the Armed Forces Bowl versus San Diego State. Nobody other than us thought we could win that game. When we did it was one of the greatest feelings in the world. Finishing the season 10-3 which was tied best in program history.

Serving as a mentor to the Junior Black Knight Football team. I had a lot of people who have influenced me a long my life and to be able to do the same for kids chasing the same dream I had is an unbelievable feeling. Serving as a role model to someone is honestly one of the best feelings in the world, not to mention it was several kids in my case. There was no better feeling seeing them come up to me with big smiles ready and happy to see me. They were like the little brother and sisters I never had.

Houston Texans and still is my favorite team.

Randy Moss simply because I think he is arguably the best wide receiver to play the game of football. His story is remarkable and to be able to learn from him would be absolutely incredible.

Martin Luther King because of the influence he brought not only to America but worldwide. I would love to pick the brains of a leader of his caliber.

Kobe Bryant because he is one of my favorite athletes and not only that but a great person.