Calling the New York Giants, season a disappointment would be putting it lightly. From devastating losses to season-ending injuries, the only consistent thing about the Giants, where they looked awful all year. I won’t sit here and harp on it all, just know that it was ugly. Good news is, this team is still very loaded with all-pro level talent. From Eli Manning, and Odell Beckham JR, on offense, to Landon Collins, and Damon Harrison, on defense. The team has a solid foundation, to build upon. With that said, we decided to work on a Giant sized mock draft. Enjoy! 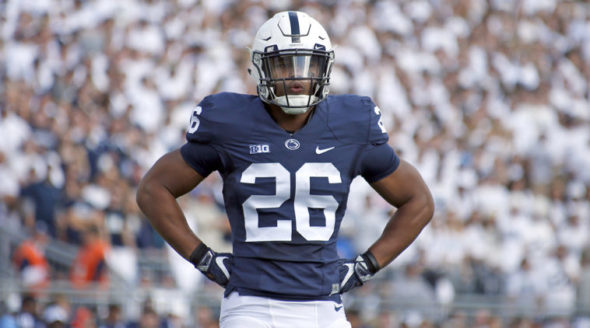 RD 1) RB Saquan Barkley (Penn State)- Everyone and their mother has said the Giants, need to find the future at quarterback here. I tend to disagree, Manning is still a high-level signal-caller and could be playing for another 3-5 season (See Brady). The NFL is a copycat league, and one thing that should stand out too the Giants front office is seeing what a blue-chip runner can do. Watching the Cowboys have success with there runner (Ezekiel Elliott) and should look to do the same. I have heard many a scout, compare the two (Barkley and Elliott), as they both have great size, run with power, balance, and have breakaway speed. Barkley, could easily be the home run hitter, the Giants need, helping soften up defenses, and controlling the clock. A good run game could single up Beckham in coverage, and help elongate Eli Manning’ career.

RB 2) OT Martinas Rankins (Mississippi State)- The Giants need offensive line help, simple. For some reason they have struggled, to find the answer up front. If they are going to invest in a runner, they need the guys up front to set the tone. Enter Rankins, this 6’6 315 man, is one of the more athletic players’ in the draft. Built with a strong base, to help road-grade in the run game, and the natural quickness to help in the passing game. Rankins, could be a day one starter, helping sure up an offensive line, that has struggled the last few years.

RD 3) LB Jerome Baker (Ohio State)- New York, has a solid defensive line, and a good backend, but need help in the middle of the field. Hence the Baker choice. Blessed with speed, and the ability to run a playdown, Baker is a complete steal here in the third. At 6’1 230, he has good size, and is capable of taking on blockers at the point and finding the ball. He adds to the passing game in coverage and would be a solid special teamer. He would need time adjusting to the pro game, like all rookies, but he could be a difference maker for the G-men.

RD 4) OT/OG Alex Cappa (Humboldt State)- At 6’6 300 LBS, Cappa may be best suited to play inside at the guard spot. But he posses all the tools, to be a legit starter on the outside. He has good movement in his hips, to help him pull, and get out in front of the ball. Solid hand’s to keep defenders off his body, and always seems to be the one delivering the blow. The Giants could be in need of a complete overhaul this off-season, so bringing in a prospect like Alex Cappa, could go a very long way.

RD 5) WR Allen Lazzard (Iowa State)- As a Philadelphia Eagles, fan, it is scary to think of an offense, with the likes of Barkley, Beckham JR, Shepherd, and a prospect like Lazzard. At 6’4 220 LBS, He is built to be a big bodied possession wide-out, but he is so much more than that. He has the hands to catch the most contested passes, and the sneaky speed to create separation. Run’s a clean route tree, and could easily be one of the most underrated players’ in this year’s draft. The trio of him, Beckham JR, and Shepherd would keep defensive coordinators awake at night.

RD 6) DE Chad Thomas (Miami)- Thomas’ draft s stock has been all over the place. Some scout’s say he is an early day 2, while some say they see him going in the 7th. Despite where you see him, you have to admit, the kid can play. He has good size (6’5 277 LBs) and is a complete bloodhound for the football. Good against the run, he can set the edge, while keeping offensive linemen off of him. But what he brings to the game, is his relentlessness to attack the quarterback. The Giant’s have a solid combo on the outside, but finding the future would be a smart move.

RD 7) OG Jamil Emby (Maine)- Like I stated earlier, New York, could be looking to overhaul their front line. So adding all the talent they can, would behoove them. Emby, is a solid run blocker, and although he needs a little work in the passing game, his issues are coachable. He could fill in at both Guard spots, and at right tackle, so he adds value that way. He has the potential to be a starter one day if the right people get their hands on him.