NFL Draft: 3 Linebackers that the Philadelphia Eagles, should keep an eye on.

The Philadelphia Eagles had the deepest roster in the league for 2017-2018. Which helped when they lost key contributors, throughout the year, and go on to win the biggest game of there perspective lives. With that in mind, when you look at the depth of the team, you find it taxing, when searching for obvious holes. Some would argue, they need help on the corners, some say depth at the safety position, but when you look deeper. The obvious hole is in the middle of the defense at the linebackers spot. Sure, as of now, the starting line-up of Jordan Hicks, Mychal Kendricks, and Nigel Bradham, could rival any trio in the NFL. But when you factor in Hick’s injury issues, Bradham, potentially leaving in free agency, and Kendricks, possibly being used as a trade piece, you can see the issue the Eagles face.

Good news is, the draft is vastly approaching, and the opportunity to add a talented prospect could change the outlook, of the whole thing. Searching top to bottom, of the linebacker group, we found 3 players, who could interest the front office. 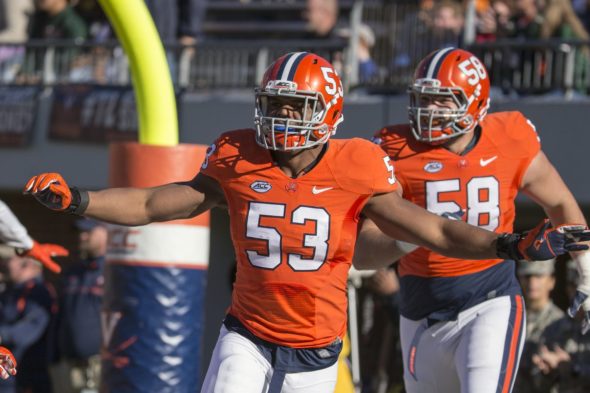 1) Micah Kiser (Virginia)- 6’2 240 pounds, and a pure playmaker. A true sideline to sideline prospect, Kiser adds value in both the run and passing game. He is a thumper and true tone setter, that has the size to play inside, but the athletic ability to play on the outside. Much like current Eagles LB, Nigel Bradham, Kiser can rush the passer, cover a slot WR, Running Back, and tight end. The addition of Kiser would go a long way, in filling any hole created by the loss of any of the starters.

2) Leighton Vander Esch (Boise State)- Leighton, could be the Eagles top choice in this year’s draft. At 6’3 245, he possesses the size, to play at all three spots in the middle of the field. He is a run stopping monster, that can also cover. Preparation is the name of the game, and Vander Esch, does plenty of that, as he is considered a tape jockey as well. Adding a leadership quality to any roster, he would be a great pick up and could be another true playmaker, next to Jordan Hicks.

3) Josey Jewell (Iowa)- Perhaps the most underrated linebacker, in this years NFL draft, Jewell, is another talented prospect in a long line of studs in Iowa history. He is 6’1 235 LB’s, can cover well, while shutting down the run, as a true difference maker. He is solid in everything he does, and the few issues he does have, are coachable. He may not be the biggest prospect, but he adds value as an MLB, as the quarterback of the defense. He can also rush the passer and is a 3 down backer.  The Eagles would be wise to keep an eye on any of the three, but Jewell could end up being the next Sean Lee (Minus the injuries hopefully).