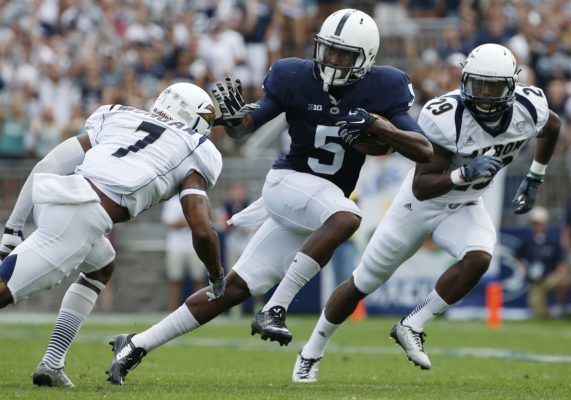 DaeSean Hamilton stands 6’1 205 pounds, Hamilton is one of the top wide receiver prospects in the 2018 NFL Draft. In high school Hamilton was a top play maker in the state of Virginia, A four year letter man at the receiver position for his head coach Lou Sorrentino at Mountain View High School. When he was a senior, Hamilton was named honorable-mention for all state and earned first team all district as well as all area and all region honors. In his senior season Hamilton caught 64 passes for 1,073 yards and tallied 10 touchdowns. Giving him the Offensive Player of the Year in his District. Hamilton was a two time team captain. Coming out of Mountain View High School Hamilton was ranked as a four star recruit by ESPN and a 3 star prospect by Rivals, Scout and 247 Sports. He was ranked among the top twenty recruit in the state of Virginia. And was ranked as the 63rd overall wide receiver according to 247 Sports. Hamilton graduated with honors and an advanced diploma from his high school.

Hamilton has amazing size to be a slot target in the NFL, he runs precise and crisp routes. He comes out of breaks quickly and at sharp angles as well has he can hold on to the football through contact on the sidelines or in the middle of the field. He’s able to win contested catches anywhere on the field. But where he is at his best is when he is gets thrown to on 3rd downs. Just a little under eighty percent of his catches during the 2017 went for a first down. He is very good with yards after catch (YAC) Scouts have said Hamilton is unselfish from his teammates and coaches. And that he will take it upon himself to teach younger players and help them adapt and grow on the football field.

Hamilton has to win with his routes instead of quickness. He has struggled with drops in his career, And though he has gotten better in 2017 drops still seem to be an issue for him. He isn’t a bad blocker but he isn’t a good one as well. Hamilton has to be more physical as a blocker at the next level.

I have a 5th round grade on DaeSean Hamilton, I think he will have to work his way onto a team first through special teams and as a backup player on offense. Hamilton has the skill level and the work ethic to be a quality player in the NFL but I believe it will take a few years of extra work on the practice field and in the film room.