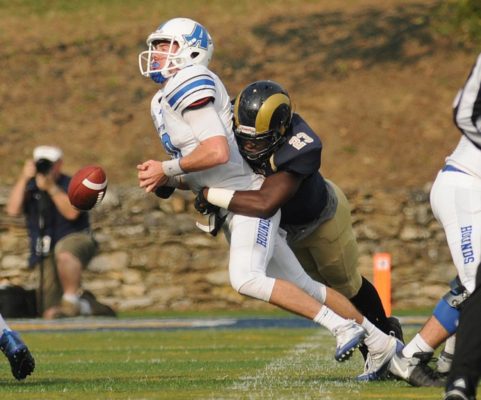 My father is my biggest role model, he instilled so many great values in me, my sibling, and all of my cousins.

My favorite teacher was definitely my Sociology teacher in high school Mr Spoales. He was one of the few teachers that could keep my attention every single class, and he made Sociology so interesting.

I played some middle school basketball and that was about it. I was like a baby Draymond Green.

During my freshman and sophomore year at Elon University we played Tarik Cohen. He had a different type of speed and quickness that I had never seen before. And coaches try to tell you how to defend a player like that. But there is only so much that you can do. The games were pretty close though.

110% Scott Dixon, he plays the biggest sacrifice position on the defense at Nose. Shutting down the A gap is the most important part of run defense and to take that double team on almost every play has to take a real toll on you. I’ve been mistakenly and purposefully put in there and trying to split a double team is damn near impossible. And it is even more impressive because he does it all with no gloves on.

Do Not Disturb by Drake. I’ve always been more of a get into the zone type of player rather than fired up. Except when it comes to celebrating something then the fire is very prominent.

I was often compared to Jabrill Peppers because of the multiple positions I played on the defense. But i think i am more of a Haason Riddick.

I think the recent passing of my dad was definitely the biggest obstacle I’ve ever faced, because you know that nobody lives forever, but it took me a very long time to accept that it was actually real. It took a long winter break surrounded by all of my siblings and cousins, and we all worked through it together.

Mostly just listening to calm music and taking everything really slowly. I also like to be one of he last out of the tunnel, it gives me the sense I am sort of the anchor of the team.

It is a dead tie between scoring my first career defensive touchdown and getting a strip sack in the quarterfinals of the 2016 playoffs when we were down to Cal PA. It gave us a big momentum shift. I like to give everybody a hard time about it saying I personally won us that game, but they always pretend I didn’t. And it’s okay. Lol They know the truth.

For my speech class i wrote an essay about how my sister is one of my heroes. I told her about it but I’d never let her read what it said.

My father, Kobe Bryant, and Dave Chappelle a great mix of the greatest I’ve ever seen at their crafts.