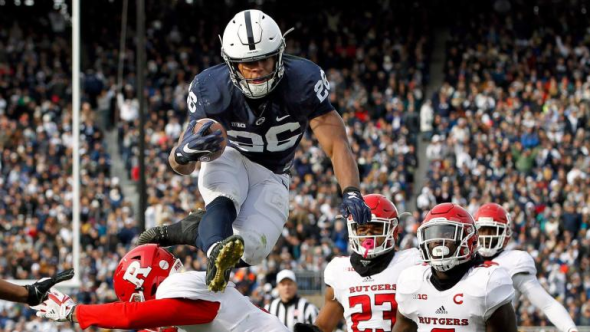 Barkley is not only the number 1 running back in the up coming NFL Draft, Many consider Barkley has the best prospect coming out this year. Talking and reading what other many scouts have said, They believe Barkley is the best back coming out since Adrian Peterson. Now that’s saying something, Barkley stands 5’11 230 pounds. He finished his career at Penn State with 3,843 yards rushing, 43 rushing touchdowns. But he also has shown to be a very good receiver out the backfield. 102 Catches, 1195 yards and 8 touchdowns.

I can see him running a 4.37 to 4.42 at the slowest. But what is even more impressive is how strong he is being able to power cleans 405 pounds, squatted 525 pounds five times, has no injury history and is only 20 years old. He totaled 51 touchdowns not including the 2 on returns. But NFL teams and execs care about the person and the way he carries himself off the field as much as they do the athlete. If you want to know about his intangibles, Barkley has been described by his former offensive coordinator who is currently Mississippi State head coach Joe Moorhead as a smart, Humble caring individual. And goes on to say that he’s one of those rare guys whose humble attitude supersedes his talent on the field.

Barkley is very patient, he has the vision and power as an inside the tackle runner. He steps through tackles or is able to drop his shoulder and is able to run through them and or fall forward. He’s very quick laterally which helps avoids defenders in the hole and out in the open. As far as pass protection goes, He’s been very dependable in his time at Penn State. Does a nice job squaring up blitzing linebackers to stop they pass rush to the quarterback. Very strong, Good hands, And if you ask his teammates and coaches about work ethic, They all LOVE how he works.

There are times where he try and dance and bounce around and instead of going forward for a small gain he takes a loss. And in games where you believe he would get well over 100 yards. He get’s stopped for 40 to 80 yards. And that’s really the only negative thing you can say about Barkley’s game. Now he does return kicks but he won’t be doing that in the NFL.

Barkley has the physical traits and looks to be able to jump in day 1 and start and do very well. Barkley won’t be asked to gain or lose any weight. You add all his traits, Physical ability, And the fact he’s never had any injury history. Barkley is a top 5 pick in the 2018 NFL Draft.

This scouting report was completed by our newest addition to our scouting team Cody Ladue. Follow him on Twitter!!