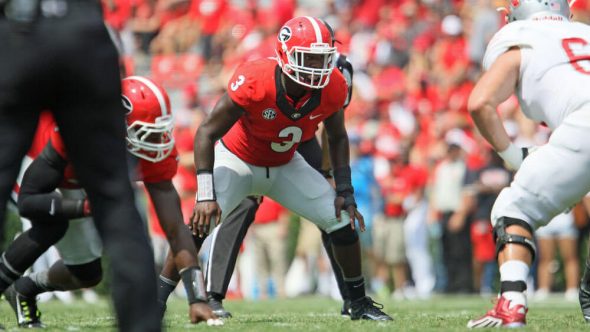 My physical grade on Roquan Smith is a B at the moment. Body Composition reminds me a lot of Myles Jack from UCLA. 6’1 and 225 pounds.

Smith’s tackling is second to none. According to Pro Football Focus, Smith has 133 run snaps, He has 29 tackles from running the ball. 5 assists, But where he is second to none is due to his 0 missed tackles. he has 21 run stops (at or behind the line of scrimmage) That gives Smith a run stop percentage of 15.8 percent. In the passing game, Smith has 176 snaps. Again with no missed tackles on. Roquan Smith will come up and hit you. He doesn’t have great power like a Foster did when coming out of Alabama last season. But he will hit you and isn’t afraid of contact.

Very well rounded, Can read run plays, attacks the ball carrier with the right angles, diagnosis plays in time to get his team in the right scheme, Sideline to sideline speed when chasing down the ball carrier, understands to force the runner back inside where his help is. Smith breaks down the play as it is happening very well and is able to make himself skinny through the hole when trying to make a tackle.
Scheme Fit:

Smith will come in and knock you backwards, He doesn’t allow yards after contact. Smith is also a very sure tackler. Once he gets his hands on you he is making the tackle. He does need a little more experience in the passing game but he has done well against the pass when called upon. I like how Smith is able to disengage the blocker and get in on tackles. He is at his best when playing the run. I’d like to see him gain a little more weight but where he is sitting at isn’t a bad weight. Myles Jack is doing just fine and they are the same size. In the run game, Smith has a good feel for finding the ball and avoiding blockers while doing a fine job of keeping the ball in front of him in coverage. Smith’s production is difficult to ignore when projecting him to the next level, and his presence in the middle is a huge reason for Georgia’s early-season domination. Pro Football Focus (PFF) has the Georgia junior ranked eighth among all linebackers in the country.

Projected Round: Middle 1st to early 2nd at the latest. (But with his play in the playoffs this season I don’t see him lasting past the 1st round.)