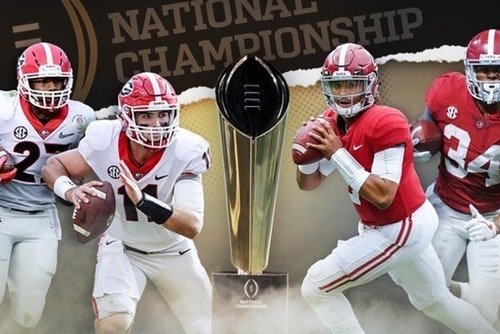 It’s an all SEC Championship, filled with NFL talent ready to show out on the biggest stage. Underlying the excitement of the game, the real story for Draft fanatics will be the key players on both sides squaring off against each other.

Alabama on Offense – Georgia on Defense: Both of these team’s strong suits will not be on display in this scenario, nevertheless I do believe it will come down to Alabama scoring enough points to keep up with Georgia. Alabama’s offense does not put up big numbers, but with a playmaker in Calvin Ridley to take the top off the defense, the Bulldogs will have no choice but to account for him in a big way. With a defense that is not stacking the box, it will be a prime opportunity for Damien Harris and Bo Scarbrough to move the ball effectively with wide open holes. The men trying to stop the Bama rushing attack will be Roquan Smith and Lorenzo Carter. With the defense stretched out due to Ridley’s vertical presence, it will be up to Smith to hunt down Harris and Bo and not let them break the 2nd level. Carter’s versatility will also help Georgia’s efforts in rushing the passer, as well as stopping the run on runs outside the hashes.

Georgia on Offense – Alabama on Defense: The Georgia offense has a dynamic duo of their own at the running back position. Sony Michel, a quick elusive shot out of a cannon back who can make any defense look foolish. Then there is Nick Chubb who despite all the injuries, still has a lot of explosiveness, and finishes off every run with a big hit. With future draft prospect Jake Fromm at the helm, the balanced Georgia attack will need to put up a lot of points. Bama has a playmaker at every level of the defense. Da’Ron Payne at DT, Rashaan Evans at LB, and Minkah Fitzpatrick at Safety/CB. Payne is one of the best defensive lineman in this draft, and will have definitely have a tall task ahead of him. If Chubb and Michel are to get away from Payne, they will be met by Rashaan Evans, and future top 5 pick Minkah Fitzpatrick. Some may like an all SEC National Championship, but one thing is for sure, there will be a lot of talent on display Monday night.