Strengths: Kupcikevicius has the size that NFL coaches look for in offensive linemen to go along with good arm length. At the right tackle position, he has a decent first step at the snap of the ball. On inside running plays, he uses good technique when engaging a defensive end to open holes in the B-gap, and he can maneuver his way to the second level to take on linebackers. On outside runs, he can occupy the defensive end or outside linebacker to make room for the ball carrier, and he uses his quick feet to pull & lead block. In pass protection, he uses his length to keep pass rushers at bay, and he can shuffle his feet to mirror defenders. His ability to pull shows that he can also be considered as an offensive guard.

Weaknesses: Kupcikevicius seems to be stiff when he comes out of his stance. When engaged with a defender, he doesn’t use a ton of physicality or drive. In the run game, he looks to rely on technique than brute strength to defeat his man. When pass blocking, he can get caught being flat footed, which makes him a target for defenders who like to bull rush linemen. He struggles with 4-3 defensive ends and 3-4 pass rushers who can shoot through the B-gap with speed, and those that have an effective rip move. Questions about him transferring twice to different schools will be asked. 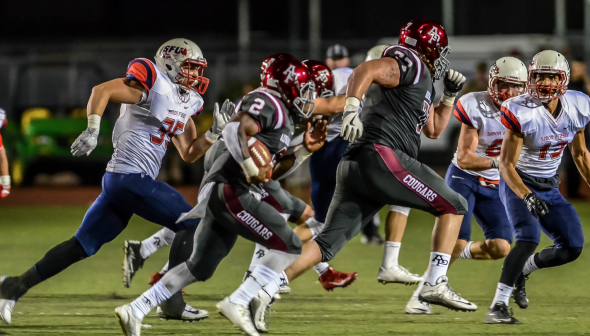 Summary: Kupcikevicius was an effective offensive lineman for the Azusa Pacific Cougars, being a two-time All-GNAC recipient. He has NFL size despite playing stiff with very little flexibility. He comes off the ball with a decent first step, and uses his feet well when pulling on outside runs, getting to the second level on inside runs, and when pass blocking. He uses technique more than strength when run blocking, and relies on his length to keep defenders at bay when pass blocking. At the next level, he needs to show that he can be more physical against defenders instead of relying on technique to defeat them, and that he can control the B-gap against pass rushers in the 4-3 & 3-4, especially those with good rip moves. He has the athletic ability to be considered as an offensive guard if needed. Jumping from the FCS level, to the JUCO level, and to the Division II level will be looked at closely by coaches. Overall, I see Kupcikevicius as a developmental player that a team can bring in as a priority free agent as depth to fit into their zone blocking scheme.