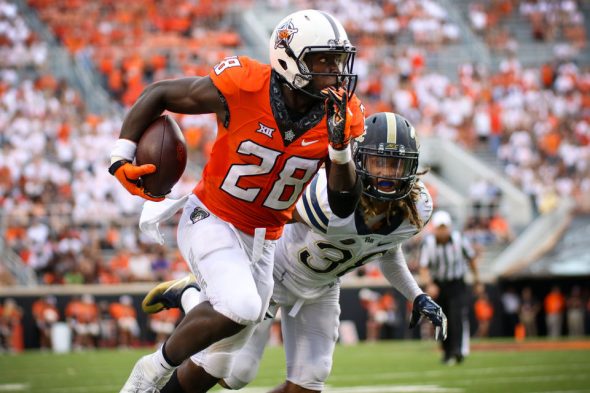 This report was put together by our newest member of Draft Diamonds Ali Jawad, go follow him on Twitter!

After a promising freshman season, Washington emerged as the Cowboys top wideout. As a Sophomore, he played in all 13 games and recorded 53 catches for 1,087 yards receiving, and 10 touchdowns. Good enough to earn him 2nd team all Big 12 honors. During his Junior season, he became one of the nations top wideouts while playing in all 13 games he recorded 71 catches for 1,380 yards receiving, and 10 touchdowns including an impressive 296 yard performance against Pittsburgh and earned First Team All-Big 12 honors. Rather than entering the 2017 NFL Draft he has chosen to return for his senior year at Oklahoma State.

Has all around great speed as a receiver. Is a deep threat and can out run defenders deep down field. Is a great deep route runner who runs his routes at full speed deep down field. Has great body adjustment and good body control. Very athletic receiver who goes up for the football. Makes acrobatic catches. Can win in 50/50 balls. Plays like a true WR1 and is the teams go to guy. Creates enough separation at the end of the play to make the catch. Able to make catches with a defender locked on to him. Is explosive off the line of scrimmage on end around plays. Can make defenders miss with his speed and cuts.

Washington has some concerns. He does not run very strong on short and medium routes. He struggles to create separation off the defenders. Must rely mainly on speed to make plays. Often struggles with run blocking although he does have the size and strength to be a good run blocker.

Washington will be a hard WR for teams to pass on. His electrifying speed and big play abilities will make it tough on defenders to try and cover him one on one. He has the ability to be a number one WR for whichever team picks him up. Expect him to be one of the top wideouts in next year’s draft class. Overall this is a player with great athletic ability and can deliver touchdowns in a hurry.