Defensive Back (Corner, Safety and Nickel)

I would have to say as of recently, Colin Kaepernick is my greatest role model. Not necessarily because of what his protest was about, but the fact that he was willing to sacrifice everything he’s ever worked for, just to give a voice to a marginalized community. It takes a lot of will power and selflessness to give up such a position of privilege and sacrifice it for a greater cause.

I would have to say my 8th grade geography teacher, Harold Scott. He was the first teacher that I could connect to on a personal level. I felt like he was one of the few teachers that went out of his way to help me improve as a student and person. Having someone believe in you at such a young age; it means a lot to a child and it meant a lot to me.

Yeah, I ran track since I was in the first grade all the way to college. It was actually my first sport. I also played basketball up to my sophomore year in high school, until I started to focus more on football.

I’ve played against quite a few great receivers but one that immediately grabs my attention is Tommy Lee Lewis. I remember having to guard him when I was at NIU and still to this day, i’ve never seen a WR as quick and explosive as him. Plus he worked harder than anyone I’ve met. Which is exactly why he’s playing on Sundays.

That’s a tough one. I think Jared Farley is probably the most overlooked because of his size. But he is one of the toughest players i’ve ever played beside. Beyond that, he pretty much facilitated the entire defense. He seems to always find his way to the ball and i’m definitely going to miss playing with him. 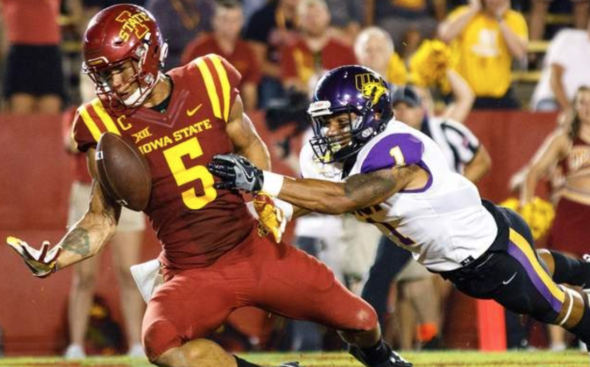 Kodak Black – “Everything 1K”. I made sure to listen to that song every game.

I would say Tyrann Mathieu. I tried to mimic his game the most. I would watch his highlight tape in the locker room before every game

Probably being released from NIU and having to transfer to my third school in 4 years. Spending two years in JUCO just to get released from the FBS school I’ve been working to get to. That took a toll on my hopes and desires. I started questioning my own ability. That’s when I just had to sit down and re-evaluate what I wanted out of life. Thanks to my friend Marcus Montgomery, I was able to get in touch with UNI coaches and eventually get a scholarship.

Not anything that I obsess over. As long as I have my music and cleats, I can amp myself up for any game.

Despite the loss, I would say when I got an interception against NDSU in the 2016 season. There was only a couple min left and at the time I thought it was the game winning interception. I remember celebrating with the players and coaches on the sideline and the UNI-Dome was so loud.

One thing I immediately think of is this great guy by the name of Marcus Fridley. He would always come down after the games and just seeing the joy he had whenever I saw him. It’s crazy how much someone can appreciate you without knowing them. I know that I made his day whenever I saw him, but he didn’t know how much he made mine. I just made sure every time we met, that I would give him as much time as he wanted to talk with me. He ended up putting me and him as his profile picture and always gave me praise. Little things like that mean a lot to me.

My family and I are considered “die hard” Packers fans. I might have obsessed about them a little bit too much growing up but hey…Go Pack Go!